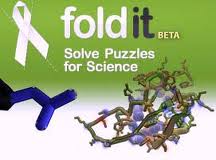 Last year, the team behind Foldit, the developer of an online puzzle game, made headlines for unlocking the secrets of a key protein in the fight against HIV, just by deals with protein folding.

The game has been part of an experimental research project, developed at the University of Washington, with an incredible outcome and success. What had been at a loss with scientists for 15 years was solved in 10 days by 40,000 people playing a game online.

The objective of the game is to fold the structure of selected proteins to the best of the player's ability, using various tools provided within the game. The highest scoring solutions are analyzed by researchers, who determine whether or not there is a native structural configuration that can be applied to the relevant proteins, in the "real world".

The idea behind is that scientists can then use such solutions to solve "real-world" problems, by targeting and eradicating diseases, and creating biological innovations.

The brain behind all that is Seth Cooper, the creative director of the Center for Game Science at the University of Washington. His research focus is on using video games to solve difficult scientific problems, thus, it is no surprise that he is the co-creator, lead designer and developer of Foldit.

What’s so impressive and the reason why we decided to include the Foldit story into our August issue of Asian eMarketing is the fact that rather than just building a useful science tool, the developers of Foldit focused on designing a program that adopted the concept of gamification for getting results.Their aim was to make the program more appealing and engaging to a public audience, in order to attract more people to the cause of protein folding. This was especially true for those people that did not have a scientific education or background. As the structure is modified, a "score" is calculated based on how well-folded the protein is, and a list of high scores for each puzzle is maintained. Foldit users may create and join groups, and share puzzle solutions with each other; a separate list of group high scores is maintained.

In a nutshell, Foldit attempts to apply the human brain's natural three-dimensional pattern matching and spatial reasoning abilities to help solve the problem of protein structure prediction. With it, researchers hope to improve the algorithms employed by existing protein-folding software by analyzing the ways in which humans intuitively approach the current puzzles that are all based on well-understood proteins.

Take a look at Seth’s speech at the GSummit 2012 where he discussed the use of games as a method to put the combined power of humans and computers toward solving problems that neither could solve alone.

Further, he provides both an analysis of the success and early missteps of Foldit, besides providing a glimpse into the future of how humans and machines can work together through gamification, which he believes will change the economics and outcomes for business, science, government and society.