McAfee predicts rapid evolution and growth of cyberthreats in 2013

McAfee Labs, the global research team of McAfee, collected an immense amount of data on malware, vulnerabilities, and threats to endpoints, networks, email, and the web in 2012 to predict which trends will increase in 2013, using their Global Threat Intelligence.

Last week now, the company released its annual 2013 Threat Predictions report that highlights the top threats McAfee Labs foresees for 2013. In the coming year, McAfee Labs expects that threats to mobile devices will become even more of a focus of cybercriminals, the influence of the hacktivist group “Anonymous” will decline, and large-scale attacks that attempt to destroy infrastructure will increase.

“Cybercriminals and hacktivists will strengthen and evolve the techniques and tools they use to assault our privacy, bank accounts, mobile devices, businesses, organizations and homes,” said Vincent Weafer, senior vice president of McAfee Labs. “Our 2013 Threat Predictions provides the general public, governments and businesses not only with the top risks in the year to come to be aware of, but also the preventative measures that should be taken to avoid those risks from occurring. Only by understanding and preparing for threats, can we empower people to secure their information”, he added. 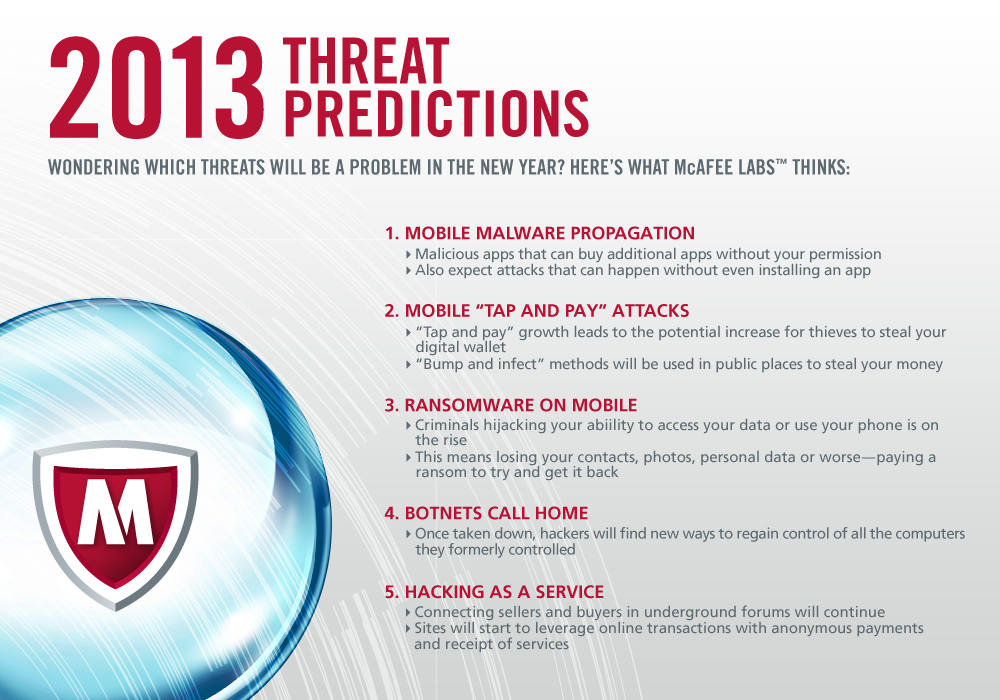 The development and deployment of increasingly sophisticated ransomware technologies, that will “lock up” a phone or tablet, and threaten to keep it that way until a ransom is paid, will be a prominent trend in 2013. The harsh reality of these schemes is that users have no way of knowing if their device will be unlocked even if they do meet the perpetrator’s demands. Since attackers hijack the users’ ability to access data, victims will be faced with either losing their data or paying a ransom in the hope of regaining access.

A new mobile worm will go on a major shopping spree in 2013 - the Android/Marketpay: a Trojan horse program that buys apps without a user’s permission. In 2013 cyber-crooks will take this malware’s app-buying payload and add it to a mobile worm, so attackers won’t need victims to install a piece of malware. In addition, mobile phones with NFC-enabled “digital wallets” are an easy target for cyber-thieves. Attackers will create mobile worms with NFC capabilities to steal money via the “bump and infect” method, most commonly used in areas with dense populations like airports and malls.

Hacktivism - the decline of Anonymous

Due to many uncoordinated and unclear operations and false claims, the Anonymous hacktivist movement will slow down in 2013. Anonymous’ level of technical sophistication has stagnated and its tactics are better understood by its potential victims, and as such, the group’s level of success will decline. While hacktivist attacks won’t end in 2013, if ever, they are expected to decline in number and sophistication.

Nation states and armies will be more frequent actors and victims of cyber-threats. Patriot groups self-organized into cyber-armies have had little impact up until this point, but their actions will improve in sophistication and aggressiveness. In 2013, many more of the world’s military units will be on the front line of social networks communicating more frequently. State-related threats will increase and make the headlines while suspicions about government-sponsored attacks will grow.

Rapid development of ways to attack Windows 8 and HTML5

Criminals go where the money is, which means although Windows 8 seems to have improved security against malware and exploits compared with earlier versions of Windows, it is likely that Windows 8–specific malware will be available quicker than Windows 7–specific malware appeared. Systems running the new Unified Extensible Firmware Interface are still vulnerable to master boot record (MBR)-based rootkits, just as previous OS versions were.

HTML5, the next version of the standard language of Internet browsers, continues moving away from the operating systems, shifting and broadening the threats landscape. There will be a reduction in exploits focused on plug-ins as browsers provide this functionally via their new media capabilities and APIs. However, HTML5 will offer other opportunities for attackers because the additional functionality will create a larger attack surface for every user, as its features do not require extensive policy or access controls. Thus they allow a page served from the Internet to exploit WebSocket functionality and poke around the user’s local network. In the past, this opportunity for attackers was limited because any malicious use was thwarted by the same-origin policy, which has been the cornerstone of security in HTML-based products. With HTML5, however, Cross Origin Resource Sharing will let scripts from one domain make network requests, post data, and access data served from the target domain, thereby allowing HTML pages to perform reconnaissance and limited operations on the user’s network.

In 2013 we will see browsers expand on HTML5 features and improve HTML5 compatibility. HTML5- based applications and websites will continue to grow and attackers will certainly turn their attention to finding holes in HTML5 security in 2013. The question is just how quickly they’ll succeed.

Crimeware and hacking as a service expand

Cybercriminals are notorious for going onto public forums to make business deals with other criminals to offer not only software, but also hacking as a service. As the number of invitation-only criminal forums requiring registration fees is increasing to make forums more secure and anonymous, these offers will be easier to find on the Internet in 2013.

Citadel will become the Trojan of choice among cybercriminals. With the recent release of Citadel Rain, the Trojan can now dynamically retrieve configuration files, enabling a fraudster to send a targeted payload to a single victim or a selection of victims. Detection will become more difficult as the footprint on the endpoint is minimal until the attack actually occurs.

Recently, McAfee Labs has seen several attacks in which the only goal was to cause as much damage as possible- a behavior that is expected to grow exponentially in 2013. If attackers can install destructive malware on a large number of machines, the result can be devastating. To keep the business running, production networks and supervisory control and data acquisition (SCADA) systems should remain completely separate from the normal network, to prevent it from getting hit in the first place.

For a full copy of the 2013 Threat Predictions report from McAfee Labs, please visit: http://www.mcafee.com/us/resources/reports/rp-threat-predictions-2013.pdf