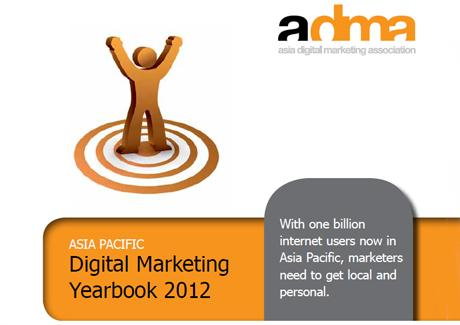 As every year, we expect the ADMA Digital Marketing Yearbook 2013 be filled with a wealth of information, but since it is not out, yet, let’s take a look back and summarize the highlights of the 2012 edition for your convenience as the facts it includes are still extremely interesting.

There are now more than one billion people online across Asia Pacific (1.016 billion to be precise - nearly 46% of the world's total), and 623 million people access the web via mobile. The billion people online in Asia Pacific are spread across more than 14 countries, with a wide range of languages, cultures and online habits. More than half of them (513 million) are in China, which has its own media properties and consumer dynamics. In fact, seven of the top eleven sites in the region are in China. Across the rest of Asia Pacific there is remarkable diversity; the way people use the web and interact with content and with one another differs significantly from Australia, to Korea, to Indonesia, to India.

The fragmentation of online activities and communities is matched with an explosion of information. By 2015, Asia Pacific's internet users will be generating 530,000 petabytes of information a year, up from 67,000 in 2010. That's the equivalent of every person on Earth exchanging about 50 newspapers' worth of information every day.

The implications and opportunities for marketers are far-reaching: Social media continues to gain in importance, social commerce is on the rise, search remains vital, owned and earned media all continue to play important roles in achieving marketing goals. And although in this fragmented environment marketers must work harder to understand and find their target customers, analytics, behavioral targeting and big data are providing more and more powerful tools for marketers to reach and engage with internet users in personalized ways.

In the following there's a look at some of the trends:

So, how are marketers reacting to the changes in online behavior and the opportunities large scale communities offer?

Here's a snapshot of trends and data, and there is lots more detail in the Yearbook:

Findings and trends for APAC, regarding user behavior, online advertising and ecommerce:

"With one billion internet users now in Asia Pacific, marketers need to get local and personal", is the key advice of the book and that’s just a small portion of the detailed information you will find on all of APAC as well as individual countries in this yearbook. So if you need further details, please visit: http://www.asiadigitalmarketingyearbook.com/