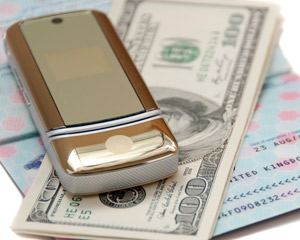 Movius Interactive Corporation (www.moviuscorp.com), a global leader in messaging, collaboration and mobile media solutions, sees multiple lines on a single device as the next big thing in mobile.

Their view follows several emerging factors, including an extensive user survey conducted across the United States by industry analysts Frost and Sullivan, rapidly increasing penetration rates in many countries across the world and reducing landline levels.

"While it is obvious that having to carry multiple phones around is inconvenient, inefficient and actually quite expensive, there have been few widely available solutions to address this dilemma," said Movius CTO John Boden. "What Frost & Sullivan has shown us is that more than 60% of people in this position would jump at the chance to consolidate their numbers on to one device."

Usage of mobile phones has exploded worldwide as it has become the primary communication tool for many people in their personal and professional lives. The result is that mobile phone or SIM penetration rates have surpassed 100% in many countries including Germany, Italy, Spain, UK, Australia, Hong Kong, Malaysia, New Zealand, Singapore, Taiwan and Vietnam.

The obvious reason so many markets have penetration rates exceeding 100% is that people have multiple means to connect either by carrying multiple handsets or multiple SIM cards. In Western Europe, for example, the penetration is reported at 130%, but when adjusted for those carrying multiple devices the real market penetration is 87%. This is because the average number of connections per user of a mobile device is 1.47, according to TIA's 2010 ICT Market Review and Forecast. The estimates in the US for people owning more than one mobile phone continue to increase with some of the latest forecasts ranging from 17% to over 35% while the estimate for those carrying three or more phones is greater than 7%.

This trend appears to run contrary to many market predictions in the past that indicated that individuals desired a simpler, unified communication solution where they could merge all their communication onto a single device or, at least, be able to manage all their communication from one device. Given this preference for a single device, why are individuals acting contrary to this and carrying multiple mobile phones? The answer can be found by looking at the different types of mobile users in the market:

Mobile's early adopters were the business travelers who needed an easy way to communicate while on the go. The use of mobile in business has expanded towards many disciplines due to market drivers like telecommunicating and the global, 24-hour business environment. The problem is that the expanded workday makes separating business and personal life difficult as individuals become accessible anytime, all day long.

Many entrepreneurs and small business owners actually run multiple small businesses. An example would be the car salesman who also owns a couple rental properties. His phone rings and he doesn't necessarily know if it's a new business opportunity or a renter calling to explain why this month's rent will be late. He gets interrupted regardless. He must respond to all business with equal priority.

Most people would place different priorities to their personal contacts and would therefore like an ability to segment their personal lives. For example, a father would likely give greater priority to a call from his children because they need a ride home than a friend who just calls to chat about last night's game. Currently, though, all these calls likely come into one number and the consumer's only means to segment the calls is via screening the caller ID.

Given the obvious need, there have been a few attempts to service this market. Multi-Line SIM cards or phones that could hold multiple SIM cards were one of the early attempts to service this need. The drawback with this option, though, is that the consumer typically has to purchase a multi-SIM capable phone and possibly having a more expensive phone with a reduced feature set. Consumers desire a broad range of handset options and multi-SIM phones simply don't offer many choices. Additionally, some handset apps have recently been introduced and over-the-top solutions have started to appear. These are very limited to specific handsets such as the iPhone.

In order to truly meet all the different market and consumer needs outlined earlier, it's important that any multi-number solution have the following capabilities:

A recent entry in this space is Side-LineSM Service from Movius. This service allows multiple numbers on a single phone. With this service, calls that are placed to the second number are uniquely identified so the subscriber knows that the call was targeted for this second number. While calls to the second number can be directed to an existing mobile phone the subscriber can also change their settings so that these calls are forwarded instead to a personal, voice-messaging system. SMS notifications of new messages received are sent to the primary mobile phone so the subscriber is aware they have a message waiting even if they are only watching one of their numbers. These SMS messages include details on who called, when they called and the length of the message. The subscriber can click on the link in the message to listen to the message. After listening to a message, subscribers can decide whether to call the person back.

Subscribers can also place calls from the Side-Line Service in two different ways. This can be done by entering a carrier defined prefix in front of the number called (e.g., *56 770-283-1000). Additionally, after reviewing messages and while still in their mailbox, the subscriber can return a call or initiate a new call. In both cases the called party will see the subscriber's Side-Line Number as the incoming number, thereby maintaining complete social separation between phone lines and their identification.

While this service is new it appears to have large potential. A big endorsement of this approach was recently made by Telefonica who announced they will be rolling out this service throughout Latin America.

One Phone Can Be Simply Complex

Consumer behavior and preference regarding telephony service have significantly changed over the last decade. In 2009, North America, Europe and Asia Pacific all saw a decrease in landline penetrations per household. In the US, a recent study by Yankee Group reported that 28% of respondents did not have a landline phone. This well-documented trend in individuals dropping their landline is primarily driven by consumer's reliance on their mobile device as their exclusive telephone.

While these consumers could have had calls or messages to their fixed line forwarded to their mobile device there was no compelling reason to maintain the landline so they simply cancelled it. The mobile phone is always available so why have a fixed line phone that is only available when you are in a fixed location? The idea of a phone number being associated with a family or organization is being replaced with the reality that every individual has his or her own distinct phone number.

While the mobile phone has made connecting to individuals much simpler because a mobile number can be the only number, it has created a new issue. The underlying problem, as outlined above with the three different types of mobile users, is that individuals don't necessarily want to be available to all callers at all times. Therefore the mobile phone has become a paradox; it has both made life simpler and at the same time more complex. People have multiple roles and personas that they prefer to keep separated. To appreciate this, let us look closer at the different types of mobile users: 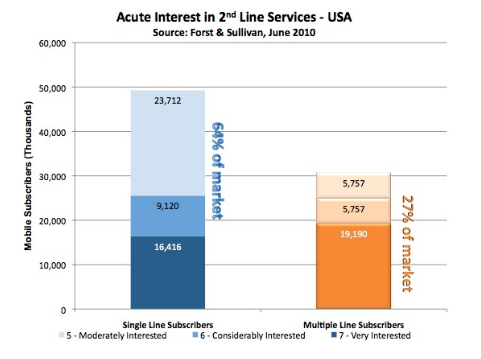 The need for multiple mobile phone numbers is real and substantial. There is a large percentage of the population that is carrying multiple phones to meet this need but they are looking for a better solution. Consumers want a one-phone, multiple-number solution. Obviously the largest potential is for a solution that can be deployed on any phone and therefore also does not require any software client on the handset. Carriers who offer such a service have the potential to truly differentiate themselves by addressing this need. The market demand is real and solutions are now available to provide consumers a compelling service.