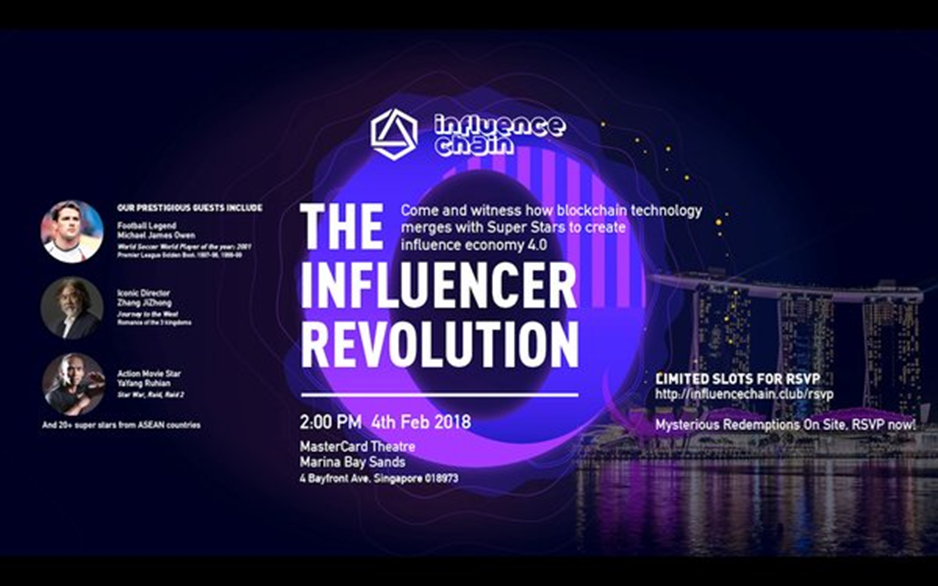 Influence Chain, founded in 2017, created a token-based ecosystem that exploits the advantages of private blockchain by building up a token exchange, where influential power (individualized intellectual property) can be monetized into digital assets for the token holders. Its marketplace, which is called Influence Exchange (INEX), is where Influence Chain Token (INC) can be traded.

Influence Chain’s eco-system creates a ripple effect in terms of promoting influencers’ talent and personal values through a process of developing an array of applications to create intimacy between supporters and influencers whereby various incentivization, redemption, crowdfunding and more enriching interactions on application level.

Blockchain Technology has been one of the hottest topics for the past few years, not only in the high-tech world, but has expanding to fields like payment, insurance and wealth management, and Singapore is clearly a country embracing blockchain with an open attitude. As one of the well-known and highly-recognized financial centers in APAC, it has taken many steps to implement blockchain and its evolution.

Another key concept and core component in the ecosystem, Influence Index, is the analytical summary made available to public, to track the performance of individual influencers listed on Influence Exchange. The unique supporters of each influencer (can be celebrities, sports icons, artists, authors and talented individuals) will be able to evaluate their influential powers and make trading decisions. Thus, Influence Chain aspires to create new value flows and uses cases between influencers and supporters.

On top of Influence Exchange, a talent network is also built up to onboard talented influencers by industrial verticals. A global network will be created to tap on sports, celebrities, public figures as the first few verticals to be launched at the beginning stage.

Let out your screaming at those shining stars: Michael Owen, the legend of the England national team and European football; Zhang Jizhong, the best-known producer and director in Chinese film & television; Yayan Ruhian, Indonesian treasure in both performing arts & martial arts; Siti Kamaluddin, the first female director in Brunei and one of the 50 Most Influential Women in Brunei. They will come with other 20 celebrities from ASEAN and China, to support Influence Chain and share their insights on this fabulous platform.