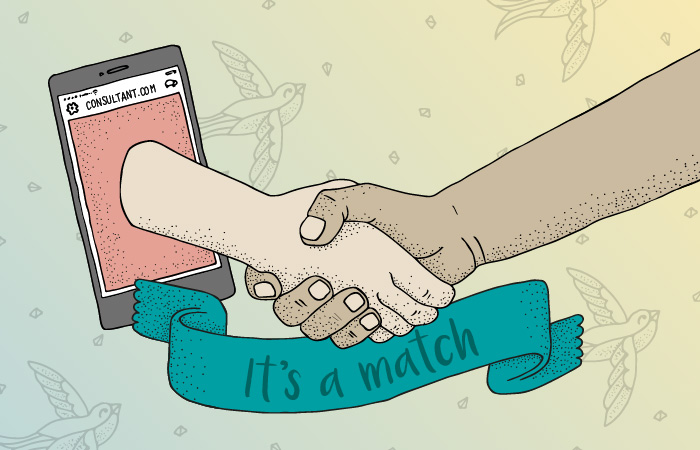 Would you pop the big question to the special person in your life via an SMS text, tweet or Facebook? If you’re hoping for a “yes!”, then perhaps social media wouldn’t be your number one choice. There are just some things that are better said in the flesh. And whilst in our new tech-savvy age some people are turning to social media to romance their other half, ironically the rate of breakups via text is rocketing. Technology is fast-tracking relationships with ‘instant access’ and ‘virtual conversations’ – yet, in many instances, they don’t last and there’s a danger that social media may actually derail them. Could the same be said of business relationships? Technology may speed up the time it takes to ‘dial up’ – but let’s not forget that it is the human touch, not touchscreen, that strengthens the relationship.

The world of online dating (can anyone say ‘swipe right’?) sees many relationships formed, but their long-term success is not always guaranteed.

At the other end of the scale, the hugely successful eHarmony is an online dating website designed to match single men and women with each other for long-term relationships. This matching process is driven by eHarmony Labs, a relationship research facility based on sound psychology. And their formula is working. The divorce rate of couples who met on eHarmony is just 3.86%, compared to the national U.S. average of 50% (American Psychological Association). The site has members in more than 150 countries, with large investors who back its success. The secret to its success? Finding deeper commonalities and shared interests between two people – i.e. eHarmony offers users the opportunity to find far more than just a ‘hook up’. The aim is genuine connection.

Although the world of business and boardrooms if a far cry from red roses and romance, forming working relationships in a digitally connected business world is now more commonplace than ever. But in our haste to settle the ‘transaction’ – have we forgotten the person at the other side of the email? What happens when you find yourself working on a project with dozens of people, who work in various locations around the world, none of whom you’re ever likely to meet? Should we be turning to eHarmony (and shying away from Tinder) for inspiration?

Using a more work-focused variant of eHarmony’s psychology-based 29 dimensions of compatibility, we might be able to work out the commonalities that can best shape our project teams of the future. And what’s not to love about that?

In the past, successful client relationships were largely built on trust. Perhaps two people met for the first time at a business function, decided there was enough ‘common ground’ to build enough trust to work together in future and then spent more time strengthening this relationship, which led to more work. All of which took place face-to-face, in physical environments, with a few phone calls in between to make sure the momentum of the relationship was never lost.

Today, we’ve turned that formula on its head. Transaction often precedes relationship. But as we spend more and more time using increasingly better virtual technology, we must ensure we build and maintain a certain level of trust with our clients and within our project teams – that is key.

Technology as progress or pain point really is within our control. We can have the best of both worlds, but we need to know how and when to use the right tools. Trust takes longer to gain than it does to lose, and is difficult to recover.

Within minutes of meeting someone for the very first time you’re usually able to find some common ground. This common ground is a safe place to build a human relationship and is also somewhere you can easily revisit when you need to re-engage in that relationship. The word relate comes from the Latin relatus meaning to carry back, which is exactly what we do in our relationships. When we meet someone for the first time, we walk away from this human interaction and take away part of them (their personal stories and information) with us, which we remember to bring back out the next time we see, speak or write to them. It shows the other person that we understand and have empathy for them, and is the foundation of building a trusting relationship. In effect, trust creates a human efficiency that speeds up the way we interact with people on subsequent occasions because we know each other well enough to proceed without caution.

Doing away with the fax is one thing, but doing away with niceties is quite another. Trust takes time and effort, regardless of the speed of your internet. With virtual reality (VR) about to overtake virtual meetings and video conferencing, let’s remember that seeing someone’s hologram in a meeting isn’t going to make them more trustworthy. That part is up to us.

Recognising that it’s a choice

The future of client relationships is much like the future of all relationships. It’s our own personal responsibility to stop and think about the best ways to solve the problem at hand and choose the right balance of human and digital solutions. This is a balancing act and will be different for each business interaction.

Yes, let’s use our VR capabilities so that our clients can ‘walk through’ their new office building even before the first brick has been laid, but let’s not get lazy about human interaction. Ditching our VR headsets for a couple hours for a few drinks at that same building is just as important.

We can have the best of both worlds, but we still need to work at it.

Technology today often minimises the need for physical meetings and human interaction – sometimes eliminating it completely. People are often geographically remote, but still work on a project together. Our desire is for that same project to be successful – but let’s not forget that underlying the endeavour is a high-performance project team of people who trust each other and work synergistically.

A head-long rush into offshoring and work-sharing can, just like in the world of online dating, end in broken hearts and mismatched expectations. Our challenge is realising the benefits of technology in a time-poor work environment balanced with building trust. In future, we’ll have to work doubly hard on finding common values and building connections in our project teams in order to take our project relationships from a ‘one-time date’ to a ‘happily ever after’.

Aurecon’s futuristic blog “Just Imagine” provides a glimpse into the future for curious readers, exploring ideas that are probable, possible and for the imagination.