The Metaverse – digital utopia or trailblazer for the future? 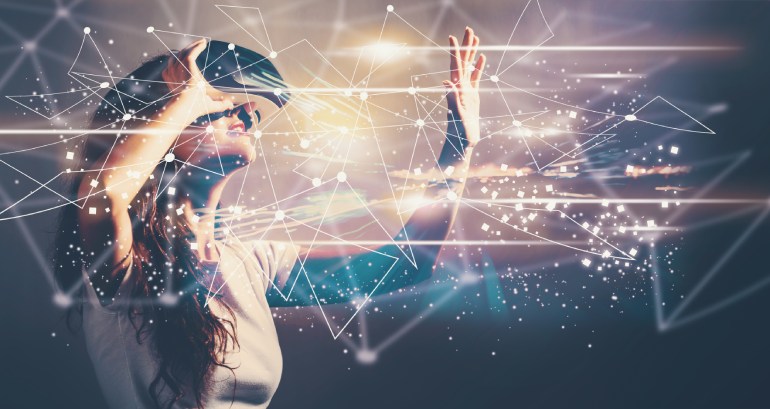 I am sure we can all agree on the fact that corporate identity is the core of every brand, and therefore the most important element for business and marketing managers. Especially since it became clear that customers are no longer purely interested in just the product, but also who and what’s behind it. Thus, companies must work out what defines them and who they are.

So, what’s Meta and its Metaverse standing for?

The word metaverse is a combination of the prefix “meta”, meaning “beyond” and “universe”, and the suffix “- verse” which points to a world of endless, interconnected virtual communities where people can meet, work and play, using virtual reality headsets, augmented reality glasses, smartphone apps or other devices.

Mark Zuckerberg sees the future of the internet in the "Metaverse", which he made clear by renaming his company, Facebook, to “Meta”. He even made Meta his new umbrella company, which includes not only Facebook, but also WhatsApp, Instagram, and most importantly, Oculus, the virtual reality company Facebook acquired in 2014. Oculus is an integral part of Metaverse development, as it requires the use of virtual reality headsets to teleport us into a virtual space where we work, play, and communicate with others.

According to Facebook’s founder, his company has been working on this idea for quite some time, but the pandemic accelerated our reliance on tech to communicate and work together and Horizon Worlds is the first step in Mark Zuckerberg’s masterplan to invent the next version of the internet. So far, the metaverse is still limited to virtual gaming platforms but Zuckerberg plans to incorporate it into our lives just like he did with social media, expecting the metaverse to reach a billion users within the next decade.

Well, the Metaverse is without doubt Silicon Valley's most prestigious project right now, considering the creation of a parallel digital world in which we can freely choose our appearance and are no longer bound by insurmountable natural laws.

Especially in times of the pandemic, the advantages of such a world become clear to everyone and it promises huge market potential. Bloomberg, for example, expects a market volume of 800 billion US dollars for the Metaverse by 2024.

For a few decades now, Silicon Valley stands for technological progress and disruption, born from a mixture of freedom-loving hippies and libertarian entrepreneurs in the 1980s and their shared distrust of government, along with a belief that technology is the key to a better world. They laid the foundation for the culture that still pervades Silicon Valley today and makes it so successful. Since then, the digital revolution has fundamentally changed the situation, creating the world's most valuable companies – particularly tech giants and social media companies, which have become an integral part of our smartphone-dominated lives.

But a virtual world controlled by tech companies like Meta naturally also harbors dangers: without democratic control, there is a risk that virtual existences will simply be wiped out at the click of a mouse. The alternative would be a decentrally organized Metaverse that guarantees freedom for the individual without making him a plaything for private or state forces.

Zuckerberg therefore plans for the Metaverse to be run not just by his company, but as an open internet for different companies to build on, offering people their own experiences. Some of the virtual experiences already exist in some form, but they are all independent and have not yet been seamlessly linked.

Belief in technological progress is enormous

Silicon Valley's technological elite are at the forefront of this evolution, rolling out droves of disruptive ideas that have the potential to change our lives forever. Anyone who dismisses Zuckerberg's visions as unrealistic dreams of the future ignores the belief in technological progress that is inherent in Silicon Valley.

Zuckerberg’s announcement of the “AI Research Super-Cluster” (RSC), which is planned to be the fastest AI computer in the world when it is fully developed mid of this year, is a good example. Not to mention that Meta's researchers are already using computers to make digital systems understand what's happening and what's being said in videos, stating that “developing the next generation of advanced AI will require powerful new computers capable of quintillions (a thousand raised to the power of six) of operations per second”.

The company already started using RSC to train large models in natural language processing (NLP) to understand more languages, dialects, and accents to build entirely new AI systems that can, for example, power real-time voice translations to large groups of people, each speaking a different language, so they can seamlessly collaborate on a research project or play an AR game together. The supercomputer is, in addition, said to enable speech recognition even in challenging scenarios with lots of background noise, such as parties or concerts, and intends to identify harmful content on its platforms faster, since “taking up a stance” has been added in the past two years as another component, to gain the trust of consumers, for example, in the form of statements, comprehensive CSR measures or sustainability initiatives.

The Metaverse can most likely only be accessed initially with a Facebook account and a virtual reality headset – preferably from Meta's Oculus brand – so that Facebook can link identities to a profile and collect valuable usage data. It is expected to grow and expand over time, even if it starts out as a simple virtual reality alternative right now. It is believed to grow into a gigantic part of everyday life in the coming decades.