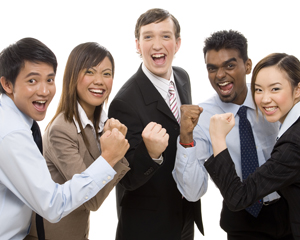 After two days of intense discussion, involving some of the world’s largest brands, agencies and publishers, the Mobile Marketing Association Forum Singapore (MMAF) brought together over 260 delegates and speakers from different parts of the mobile marketing and advertising industry.

Industry luminaries made connections, shared knowledge, considered strategies and otherwise debated and discussed the future direction of the industry.

This year’s MMAF focused squarely on the consumer, and many speakers shared that effective advertising had to be engaging for the consumer to achieve the best results. Another theme that emerged was the strong successes displayed by permission marketing campaigns throughout the region.

Asian e-Marketing had a chance to talk briefly with Mr. Michael J. Becker, MMA’s Managing Director in North America, who showed real excitement about what happens in Asia, saying: “The nice thing about Asia is that you get the complete spectrum, which you don’t necessarily get in other markets, not to mention the big numbers. In the North America market we get really excited when we get 100,000 downloads, but in Asia it is more like we got 10 million!”

Michael was also extremely impressed by the technology presentations at the forum as well, like the iButterfly augmented reality solution which is, according to him, one of the coolest technologies that he has seen in a long time. It is actually an entertaining iPhone application that uses AR, motion sensors, and GPS functions to collect coupons, or as Michael describes it: “Basically they have created an augmented reality solution and what they did was, when I hold up my phone and I look out to the world via the lens of the camera, butterflies start floating on the screen and those butterflies are icons to coupons related to the businesses. If you swipe your camera you capture the butterfly - each has a different set of coloring and scheme - so you can catch these butterflies and create a collection of all of these unique things. So I’ll go as far to say that you have a really beautiful implementation of a very simple marketing and incentive process called coupons.”

A lot has been going on recently at MMA since hiring Greg Stuart as global CEO in the middle of last year. The Association’s concerted effort to focus on brands and marketers as well as the marketing side of the business is a more and more obvious and natural transition which the industry has been undergoing since 1997. “If you really start thinking about it, 2003 or 2005 is when the whole world was mobile enabled, it was basically when the US finally caught up, and then right about now the 2009/2010 timeframe, pretty much the whole story prior to that was R&D, technology, trial, experimentation. In the 2009/2010 timeframe, it started moving into a marketing discussion and budgets started to be allocated from the marketing side rather than the technology and R&D side. So we are now seeing a real true story of a marketer enabled channel, not a technology driven channel”, Michael explained.

That is indeed confirming the feedback I got from forum participants, who told me that they feel so good being part of an event that combines marketing and technology, driven by the demand and need of the consumer and delivery of value to the consumer. Michael elaborated: “It’s a consumer focused, value driven relationship between brand and consumer via the mobile channel. Previously it was a potential discussion, now it is an implementation discussion, so that’s really exciting.”

MMA recognized the trend and started to deliver a number of new assets to the industry, launching the global truth in regional relevance in mobile marketing, an entire educational series underwritten by the Coca-Cola Company that teaches people the global truth about mobile and how it is regionally applied within their marketplace. MMA is uniquely suited to do this as it is the only global trade association.

The North American Marketing Forum, which is four times the size of the Singapore Forum, will be held in New York from June 15-17, 2011, and some 700-800 people are expected to attend. Industry leaders will talk about how they are leveraging and using mobile, for example, Eddie Hartenstein, the Editor of The Tribune and other CEOs and CMOs from major organizations.  The Association will also announce a project with Google, where Google has just completed a 30 market consumer attitudes and users study and a five market business readiness study as well that will be presented, co-branded and released with MMA. Another big program that MMA is launching in July, for the first time, is the CEO/CMO Summit, which will bring together around 125 senior global leaders.

Since their last interview with Asian e-Marketing, MMA has also developed a new class of premium member, which includes global companies that have invested a significant amount of time, money and resources to underwrite and support the building of assets for the industry. “Coca-Cola has underwritten education; Millennial Media has joined and they are underwriting the publication of research; InMobi has joined and they are underwriting the CEO Summit and enabling us to build that asset for the industry”, Michael added. Seven companies have joined so far as premium members, but without a doubt we can expect more, considering that MMA has, right now, about 750 members and that number is growing very quickly.”

This year’s event in Singapore featured agencies instead of ad networks, namely QAIS Consulting, Possible Worldwide, Starcom MediaVest and Euro RSCG, that took part in the agency shout-out, where each had five minutes to present how they are gearing up to take on mobile advertising and marketing and helping their clients (brands) to explore the medium of the future.

The “Pitch” has been another highlight of this year’s Forum, where innovative young start-ups had the opportunity to show off their new technology within six minutes using only their product demos, no presentations and no videos. Six companies took part this year, covering a range of products: location-based services; mapping; electronic billing; mobile apps; and remote camera viewing. For the audience, this was a glimpse into the future, and a chance to be exposed to exciting new products in the ever innovating mobile marketing and advertising industry.

It seems that everything is moving to the small screen and I liked Michael‘s metaphoric description of the mobile future meeting digital media when compared to traditional media by describing how the Amazon River meets and merges with the Rio Negre: “It’s really fascinating to see two rivers that meet and it takes them nearly four miles to merge because when they meet they are moving at different temperatures, different speeds and have different densities and so it takes them time to mix together and manage, the exact same thing is happening in marketing. You now have the traditional marketing river meeting with the digital marketing river and they are co-existing in the same riverbed of consumer engagement, but they are not merging and they are not merging for a number of different properties, how we measure media engagement, how we engage the consumer, the tools that we use to interact with the consumer, and the mediums by which we use to communicate with the consumer, there are all of these different things happening.”

Michael continues: “What’s interesting is that mobile is bringing them together, mobile is the one medium that co-exists in both the traditional and digital, because I will use mobile, like digital advertising and digital engagement to drive people into traditional retail. I’ll use mobile when they are in traditional retail to look at a product and learn more about the product and become more informed about that good or service and then eventually buy it at traditional retail. So mobile is the one element that co-exists in both worlds and will be the unifying factor to bring us back to a common set of marketing practices and then the undercurrents in that are all tied into mobile too: privacy; consumer identity management; digital rights management; content management services and solutions; 360 view of consumer engagement, all these other buzz words. So I am excited about this meeting of waters market analogy, it’s an analogy of a great natural phenomenon that perfectly aligns to what is happening here. You have the major catalysts, you have the undercurrents that are eventually bringing us back to a unified practice of marketing, where we will no longer be talking about mobile marketing, it will be just marketing and then there are all the different elements of the media just beneath it.”

Michael’s counter-part Rohit Dadwal, Managing Director, Mobile Marketing Association, Asia Pacific definitely agrees and actually even goes a step further by saying: "The entire industry is now speaking the same language: consumers are not subscribers, or profiles, or devices,” he said. “This new medium is helping build personal relationships with the consumer by establishing emotional connections. It is time for the industry to go from competing amongst ourselves to partnering to compliment other media.”

Thank you MMA for doing such a terrific job!