Why Mobile Advertising Will Ignite a Creative Renaissance 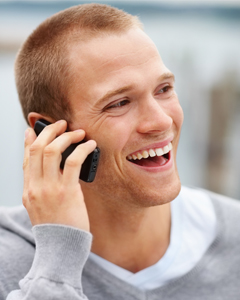 Steve Jobs said, “Most mobile advertising really sucks.” We at InMobi agree and while our approach may be different than that of Mr. Jobs, it’s impossible to deny that iAd brought some much-needed attention to mobile creative execution.

We are convinced the important differences between mobile and the PC Web will spark the re-emergence of creative as a driving force in digital advertising.

Creative’s impact on advertising is well understood and has been the focus of agencies for almost all of the 20th Century. As advertising began its migration to the PC Web expectations were sky high. Sadly instead of ushering in a new era of creativity, Internet advertising creative has earned a tarnished reputation.

Creative on the Internet is generally viewed as either a nuisance, with the continued persistence of unfriendly formats such as pop-up windows or it is seen as purely factual and mundane, lacking any emotional impact. For example, formats such as Google search ad copy or tiny graphical ad badges offer little opportunity for creative talents to shine. To illustrate this point I sometimes ask audiences when I speak, “When was the last time you saw a PC banner ad that you actually remember?” and I usually answer this myself with, “Never.” On mobile things are going to be different.

Creative with high production values has already had a huge impact in the mobile advertising space. iAd alone doubled the spending on mobile display in the US and this demonstrates a real pent-up demand for high quality creative in the mobile channel. Advertisers driven by the demise of television viewership, the failure of creative on the PC Web, and the success of performance base advertising in digital, now see a golden opportunity to leverage the creative potential of mobile devices.

Why creative on the PC Web failed

Creative did not work on the PC Web like it did in television for a variety of reasons. Initially the PC Web did not support animation, video, and website designs were visually austere, and progressed only to become more cluttered and confusing. The least quantifiable and what I believe is the most impactful reason why advertising creative never evolved, is the nature of the content that drove the PC Web’s success. 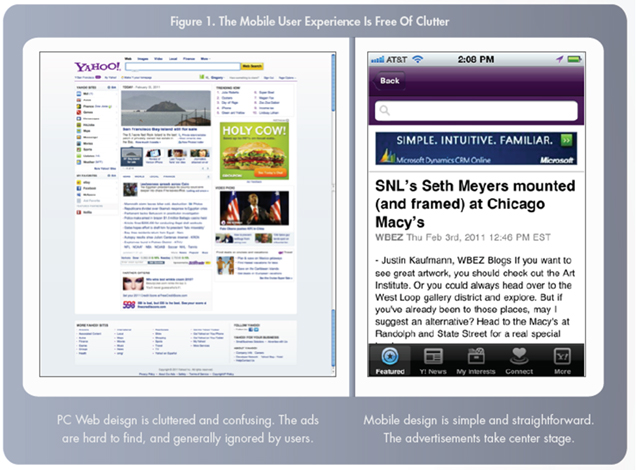 The PC Web is primarily a fact-based medium. Consumers love to “Google” facts and figures, look-up information in Wikipedia, read the news online, get driving directions, research major purchases, browse travel sites, the list is endless – sadly all these tasks are just fact based searches. The entire medium lacks a major element that has traditionally made advertising on television so compelling and that essential element is storytelling.

The lack of storytelling is what drove PC Web advertising to be entirely fact based. Performance based ads with compelling offers and coupons succeeded, because the PC Web became synonymous with factual content. There was no place for any story to be told.

Mobile content on the other hand is almost entirely entertainment or story based. Games are by far the most popular form of content on the iPhone. The charts on the iTunes store are dominated by games and entertainment apps. With the monumental success of Angry Birds, this game alone is poised to define the medium, much in the same way Pac-Man did for early video games. Consumers will clearly see soon this division of content by device. The PC will be relegated back to the office, and will survive purely as a mundane business machine, relegated to dull, serious tasks. The smartphone will be the “fun place”, where you go to relax and be entertained – exactly like television.

What does this mean for advertisers?

For advertisers this means high impact creative execution will be the new standard on mobile devices. Consumers will expect the advertising to be as entertaining as the content. While we have seen movies and games pioneer mobile advertising, youthful brands, such as athletic apparel and inexpensive cars have been quick to follow. In 2011, as the smartphone moves from the early adopter to the mainstream, expect to see more conservative brands embrace mobile and its creative potential.

This is a part of InMobi’s thought leadership whitepaper series from the Mobile World Congress 2011 which focuses on concepts that will define the next phase of mobile advertising.