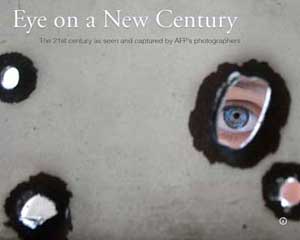 Adapted from the book The Shock of the New Century in 2010, AFP is featuring the best images from the first decade of the new millennium as its first Photo App for the iPad.

Events which marked the first decade of the 21st Century are vividly recalled through the images in the app that is called "Eye on a New Century", showing, for instance, the Concorde crash, Yves Saint Laurent's farewell to the fashion industry, Zidane's head-butt, the death of Michael Jackson, or the September 11, 2001 terrorist attacks. Each of the 130 photos has a corresponding caption and commentary from the photographer.

The menu consists of 12 images linking to the photo gallery for the corresponding year. Once inside the gallery, photos appear in full screen. Just scroll vertically to move to the next photo and horizontally to switch years. A banner can be called up displaying all the years and their content.

AFP will release as well "Rugby 2011" an easy to navigate application celebrating the best of the Rugby World Cup 2011 through the lenses of AFP prize winning photographers. The nine high-definition photo galleries feature bone-crunching tackles and spectacular tries, the emotional highs and lows on the way to a dramatic final won by hosts New Zealand.

Future "AFP Photo Book" applications will be devoted to highlights of current events and key personalities and AFP plans, in addition, a number of other photo apps that will deal with themes like the environment, faith, rituals and traditions as well as offbeat features, like a retrospective of the Arab revolutions to mark the first anniversary of the uprising in Tunisia are in the making. Other themes will appear during 2012.

With their new "pay for" apps, AFP is strengthening its presence on the mobile market, which is one of the agency's key development areas.