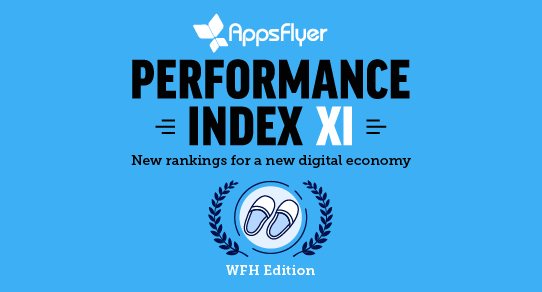 The Performance index guides marketers on how media sources are performing, and which show potential for partnership, while the Growth Index examines the diverse ad networks of Southeast Asia (SEA) to determine their rankings.

AppsFlyer’s Growth Index showcases the rise of various ad networks in the region, calculated using a comparison of indicators in H1 2020 against H2 2019. The Growth Index examines 90 million installs and 1,400 apps across Singapore, Indonesia, Thailand, and Vietnam. 2020 has been an eventful year -- regions experienced fast-paced change, and competition rose while certain apps have experienced tremendous growth during this period.

“Both AppsFlyer’s Performance Index and Growth Index offer significant insights to marketers, who today rely heavily on in-app purchases and ad monetization to drive revenue. In the current climate, the right data is crucial to success and enables marketers to focus on user acquisition and retention in the most efficient way possible. With more people working from home and turning to their devices, competition has risen amongst players in the industry. Moreover, we’ve seen that China-based networks have shown tremendous growth in Indonesia and Vietnam, gaining significant momentum in Southeast Asia. It really is a unique time for the industry.” says Beverly Chen, Marketing Director, APAC, AppsFlyer.

Chinese-based media sources have seen great momentum in Southeast Asia and TikTok in particular, climbing to first place in the Indonesian and Vietnamese growth charts, thanks in part to a near-threefold increase in non-organic installs. TikTok Ads climbed three places to take the crown as the fastest-growing network in Indonesia thanks to its explosive growth in its overall adoption, almost doubling the number of apps on the Chinese platform from last year, while tripling the number of non-organic installs from 2019.

Singapore, being a more mature market, did not see much growth or competition in ad networks. However, US-based mobile app optimization platform, Liftoff jumped to the top of the growth index, after doubling its NOI in the gaming industry.

Chinese communication technologies, VIVO and OPPO have climbed the growth charts in the three major markets of Indonesia, Vietnam, and Thailand as shown in AppsFlyer’s Growth Index. While TikTok topped the growth charts in the Gaming sector, the Non-Gaming category was also dominated by Chinese-based media sources, with TikTok, OPPO, and VIVO placing among the top five fastest-growing networks in Indonesia, Thailand, and Vietnam. Smartphone maker Xiaomi placed sixth in Indonesia’s growth rankings.

While Facebook took the #1 spot, both Google and Facebook continued to dominate mobile advertising with a significant majority of the non-organic install market in Southeast Asia, with Facebook dominating the Life & Culture and Utility Groups in the non-gaming market retention index. Google Ads showed an increasing ownership of the gaming industry amongst Android devices more so.

For the first time, thanks to AppsFlyer’s unrivalled scale, the Performance Index includes two new granular monetization-driven rankings per region and category. The new rankings rate media sources by their ability to deliver users with the highest likelihood to complete an in-app purchase, and their ability to deliver users who monetize best with ads — vital information for apps in a freemium-driven ecosystem in which apps make money primarily through in-app purchases and in-app ads. With the existing retention, remarketing, and growth indices, the 11th edition provides a complete report card on the mobile media landscape across multiple marketing activities.