What role do paid, owned and earned media play on the way to purchase?

The study "Converged Media" of C3 and Burda Community Network (BCN) intends to answer exactly this question, concluding that paid and owned are growing together but differently than often assumed.

The distribution of media use on the way to purchase surprised the study authors, because the interaction of Paid, Owned and Earned Media turned out to be differently than previously thought. 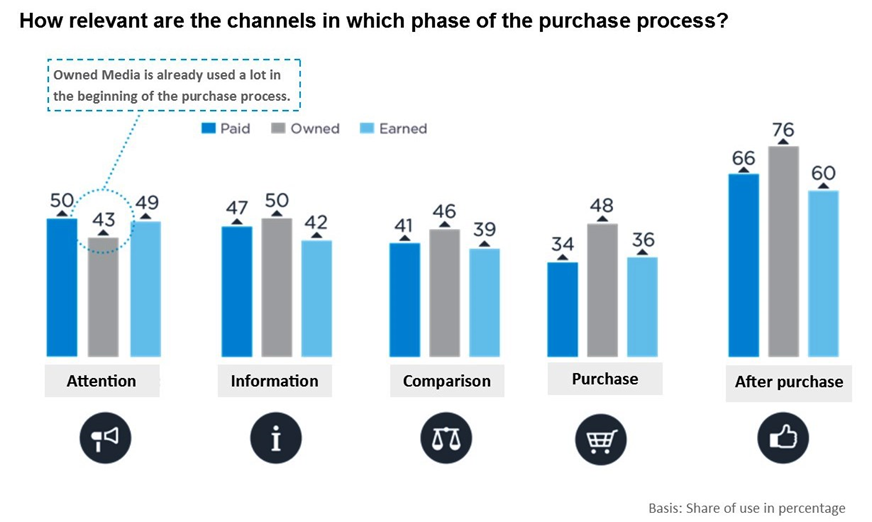 Commonly, it has been assumed that the use of Owned Media – hence, content from social media, corporate websites or blogs - would rise in steps throughout the individual phases of the purchase process up to the actual purchase. Instead, social media content already plays an important role at the beginning of the purchase decision process: 43% of the consumers’ surveyed use Owned Media content from the beginning.

The role of Paid Media surprised the study authors of C3 and the fact that it is still relatively high, even in the final phase. Because the proportion of Paid Media is almost as high with 34% as that of Earned Media (36%). Now it could be assumed that recommendations given in the final stages of a purchase turn the balance, causing the classical brand communication taking a back seat. Besides, it could mean that advertising is able to serve as an adviser, if coming across as being honest and being able to communicating the brand's values.

All the more important is a consistent strategy across all channels, summarizes C3 Managing Director Gregor Vogelsang, concluding that this means that content marketing won’t work without paid, asserting that companies will achieve a much higher value across all channels and finally a higher ROI with a consistent strategy for their clients than by individual investments.