Cloud Computing: It’s an Evolution, Not a Revolution

Last month, Springboard Research was holding its Cloud Asia 2010 event in Singapore and will even have a second round on the subject in Hong Kong next week.

Especially the excellent speeches of Mr. Michael Barnes, Vice President of Software and Asia Pacific Research at Springboard Research, are worthwhile to summarize in this feature, as he was talking about the state of cloud computing - trends, issues, opportunities, and its adoption in Singapore.

Although, there have been many events on the subject in the past months, his discourses were revealing as he mentioned a lot of uncertainties on what Cloud Computing actually means for businesses. Having just finished Springboard’s annual cloud survey of over 474 Asia Pacific users, his presentations dealt with ‘real’ examples of the issue, shared data and proof of the tool from a user perspective. Cloud computing, put simply, is “a collection of IT-enabled resources and capabilities that can be delivered via the Internet as a service”, Michael defines. Quite interestingly, only 55% of the 74 companies surveyed in Singapore found the product relevant and 60% of the same users felt that the product was over-hyped and confusing. But as an advocate of Cloud Computing, Michael encourages users to focus on the practical benefits, such as lowered costs driven by economies of scale and much greater flexibility in sourcing and adapting to change. 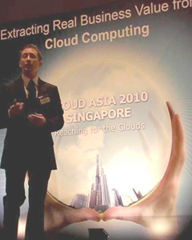 needs, ‘Cloud’ capabilities are only in its preliminary phases and are opening up endless possibilities to the varying marketplaces. In his words: “Cloud Computing is the next phase in the delivery and consumption of IT-enabled services and a major evolutionary step in the maturing of the IT industry”. “It provides an opportunity for organizations in Asia Pacific to leapfrog competitors in other regions”, he adds and discloses that he expects organizations across Asia Pacific to embrace Cloud Computing as a way to drive greater standardization at the IT infrastructure level, while simultaneously lowering the resources required to leverage technology solutions for business benefits. Although awareness of Cloud Computing in the Asia Pacific region is still low, it will continue to drive further demand for Software-as-a-Service (SaaS), as well as broaden the types of services available via additional on-demand model, such as PaaS (Platform as a Service), and IaaS (Infrastructure as a Service).

SaaS currently represents 90% of the cloud market, as businesses can relate to their services, requirements and innovations for their future growth, though infrastructure and platforms produce the highest demand across the region. For businesses it is about leveraging the multi-tenancy and shareable resources to achieve economies of scale and driving innovation to those areas where they can add more value. “It gives companies the chance for more scalability and dynamic resource allocation in a timeframe that they require”, Michael points out and mentions here mainly two types of clouds:

Most markets, with the exception of India, chose the Private Cloud, however, both types allow the users ease of access, economies of scale, and the ability to share resources and more efficient provisioning.

According to Springboard’s researches, 60% -80% of Asian companies’ IT spending supports activities they already have. Michael equates this with ‘keeping the lights on’, meaning that there is no added value to that massive percentage of IT spend. In today’s environment, however, businesses should be spending at least 30% on innovation or improvements on products to move forward. On the other hand, he points out that “most software has a usage rate of only 20-30% and feels that it is waste to pay software one hundred percent, if it is possible to pay for its usage only - comparing it with charging for electricity, water, or telephone bills. Thus, according to Michael “the ongoing evolution of IT will allow efficient allocation of resources – best of breed capabilities and limited waste, but more importantly massive increase in accessibility”. “There is no good reason why we should own the underlying infrastructure from a business standpoint. As well as we do not own the rights to a telephone line, when we only want it to function well, we should picture the Cloud”, he added.  Fact is that the adoption of Cloud Computing is gaining momentum and has doubled worldwide since 1999, although its fraction of the pie is still small (approx. 20%).

The main reasons for its adoption are according to Michael:

In growth markets such as Singapore, Cloud Computing gives a business the opportunity to innovate, creating a ‘change agent’ rather than an ‘enabler’ who operates in an environment with limited IT capabilities and still maximizes ROI of technology that remains key to competitive advantage. The lack of ‘legacy’ in some Asian markets actually provides an opportunity to companies in these markets, allowing them to leapfrog global competitors in more developed countries that invested too early.

Still, there are a number of challenges that Cloud Computing faces, as Michael points out: “Security, integration, management, and data governance”. In this context, establishing and maintaining trusted relationships is critical to overall market growth. In fact, delivering strong support is even more important in the still nascent Cloud Computing market as it is needed to overcome the early skepticism, uncertainty, and doubts that characterize the market”, Michael advises. Indeed, Cloud vendors struggle in reality more with trust than technology issues.

Michael emphasized as well that the implications of cloud computing for IT decision makers have three common drivers - lowering costs, improving services, and sharing resources:

“Most processes are evolutionary and we should embrace and understand the cycles so that we can learn from those phases and develop on what works and what doesn’t”, Michael highlights. And states further: “There are still going to be technological challenges that will not be fully resolved in this evolutional cycle and whilst we will make the wrong choices in some instances the underlying principles are sound”. Typical concerns are for instance loss of control and loss of ownership of data, which is why storage and disaster recovery rank second in priority for current non-users.

Still, results from Springboard’s survey shows, that data storage is foreseen as the key area in the future for the take up of cloud computing, as well as Web conferencing, e-mail and Cloud solutions for enterprise applications such as CRM, ERP, SCM, BI, etc., constitutes the bulk of Cloud-related spending.

In the end, there are five key areas to address:

After all, to sum it up, cloud computing is an evolution, not a revolution. Each company has to decide when to join the movement, to what extent, and in what areas it makes most business sense. The key is to be aware of it and to know when it is the optimal sourcing option. 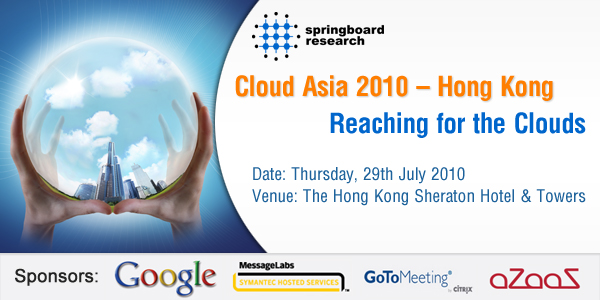