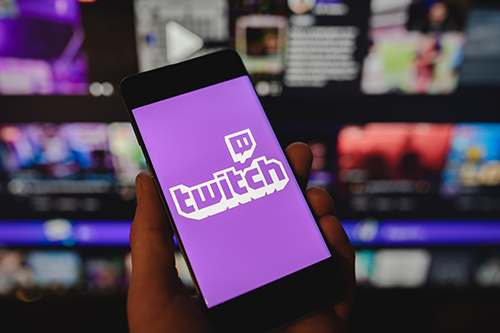 The first beta version of the streaming platform Twitch was released in 2011 and initially only intended for the transmission of video games and e-sports. But after just two years, Twitch had already garnered more than 45 million viewers per month, which is why Amazon bought the company for 970 million US dollars the following year.

Amazon then signed contracts with many game manufacturers and organizers of game tournaments, as well as popular streamers, that received special conditions in return. As a result, every major event is now streamed on Twitch and competitors like YouTube streaming or Mixer are till today nowhere near Amazon's numbers and market penetration.

The concept behind it is relatively simple: someone plays a computer game, appears via webcam or digital camera and shares the screen. This allows viewers to enjoy the games as pure entertainment, similar to a Netflix series or crime thriller on TV, with the advantage that the viewer doesn't even have to reach for the controller or mouse himself.

The platform can be monetized through placements or the option to leave a subscription on the channel that pushes the streamer. If you are an Amazon Prime customer, a subscription is even free. In addition, donations can be made. The streamer gets a message displayed on his screen, which several thousand viewers can see live – and is usually also read out.

The latest trends show that the game itself is no longer in the foreground, but rather the personal brand behind it who plays it. In addition to the various computer games that can be selected in the form of categories, the "Just chatting" category features streamers just talking to followers and telling stories from everyday life ("real talk"). Another popular new trend is watching and providing feedback on YouTube videos with viewers, which generates new relevant content as the fandom wants to learn more about their favorite streamers.

In view of the current crisis, people are looking for entertainment and personal exchange and are therefore on social networks even more regularly and definitely for longer. Since videos don't offer the possibility of direct interaction, streams are more popular as they allow viewers to talk to like-minded people and even have the opportunity to influence the program.

Many influencers from other areas are now discovering this for themselves and are expanding their Twitch channels. In live streams that take place daily or several times a week, you get a lot of impressions and can quickly build up a close relationship with the community: For example, some show their shopping tour live, others click through the web and read articles together, and there are even some who turn on their stream to get something off their chests.

For companies, this means a rethink: Twitch is no longer just a platform where you can find influencers from the gaming industry, but there are many influencers from completely different niches and areas. And the connection between a streamer and their community is unique, unlike any other influencer who spends several hours a week talking, sharing, and laughing with their followers. As a result, many develop parasocial behavior and the time spent together makes them feel like they've made a new friend for life. For many, this is a way to experience closeness in times of lockdown and restrictions. Placements are stronger here than paid and switched advertising, since the most loyal fans do not see them anyway, because a subscription allows you to watch the stream ad-free.

Starting a channel yourself is only recommended as a person, not as a company, since the personal brand is generally the success of the channels. Above all, it is important to stand out and show your own interpretation of the streaming.

Twitch is an opportunity to grow personally, to learn about its impact on others and to become aware of it, but at the same time it is a challenge to deliver a "program" over several hours that you want to stick with and not click away.

The streamer takes center stage on Twitch. He is the influencer that attracts the masses and can be booked by brands. Leaning out of his branded gaming seat with his distinctive headset on, the camera is in full view. A small sip of the soft drink – everything is broadcasted live. Clothing and background provide additional advertising space. Marketers can even advertise in the stream itself, and brand messages can be placed in the live chat that runs along the edge of the screen, for example, when viewers ask about the equipment used.

Of course, Twitch also offers "normal" online advertising, such as classic medium rectangle or various video formats, but the Twitch community is considered a tight-knit community where authenticity is most important. So it's not surprising that advertisers are trying to adapt to the Twitch universe and take advantage of the opportunities for creative campaigns: e.g., car manufacturer Porsche hosted a four-hour live video game on Twitch for the debut of its 99X Electric race car. To do this, the community had to solve puzzles, among other things, and around one million viewers watched the vehicle unveiling live.

Keeping your distance and still maintaining social contacts is possible and even fun together. Not only brands, but also online retailers should therefore keep an eye on this development, because one thing is certain: streaming and e-commerce could be among the few winners of the pandemic and emerge stronger from this crisis.