Corporate values in question, employee uncertainty on the rise

Against a global backdrop of persistent social, economic and cultural change, Zeno Group’s new global study on “Barriers to Employee Engagement” looks closely at employees’ concerns about their workplace and how those issues, left unchecked, are standing in the way of effective engagement. The study revealed widespread concern among employees on current business topics like job loss due to automation and generational differences on issues such as work-life balance, with the overall findings pointing to a clear call to action for communicators and management.

Most notably, the study found that a company’s mission and values, the clear starting point for corporate behavior and decision-making, are now in question. As many as 44% of respondents globally said they are concerned about their own company’s mission and values. More specifically, a significant number of respondents said they “do not know what their company truly stands for or represents,” ranging from 30% in the U.S., 32% in Canada, 37% in the U.K., and as high as 54% in Singapore. For millennials – compared with all other generations surveyed - the level of concern about corporate values was greater, as much as 12 percentage points in the U.S. and 13 percentage points in the U.K.

“At a time when social and political issues are acute and polarizing, employees naturally are questioning what their companies stand for, and too many of them say they are uncertain,” said Mark Shadle, Managing Director, Zeno Global Corporate Affairs. “Some employees think their company’s long-held values have grown out of touch in a changing world, while others claim the company values are no longer aligned with their own. The foundation has become unsteady.”

Alignment on values is critical, especially when balanced with the study’s finding that 70% of respondents consider their job “an important part of their identity.” At the same time, 87% globally say they want to work at a company where they “feel like part of a family.”

The mission and values topic findings revealed demographic nuances as well. For example, employees with children were 37% more likely to be concerned about their connection to company values than non-parents. Among that group, millennials in management are 55% more likely to have concerns.

Zeno’s research also explored specific areas of concern in today’s workplace, based on prominent topics in the media. Respondents across all markets confirmed accelerating technology, work-life imbalance and information overload as major stressors in their jobs.

Automation anxiety - employees are worried that new technologies could put them out of work. The study found that 40% globally shared this concern (32% in the U.S., 35% in Canada, 37% in the U.K.). Singapore workers had the greatest level of concern at 59%.

Work-life imbalance - despite flexible workplaces, the concept of balance remains a mirage for many workers. In the U.S., 57% grapple with the issue. Notably, across all markets, it’s millennials who are most concerned about the issue -- as high as 65% in the U.S.

Along with their overall concern about these critical workplace issues, a majority of respondents globally believe their companies are “not making progress” on these issues.

An opportunity for management

Amid all these concerns, the research suggests that employees are not getting what they want from the boss – clear, relevant communications that will enable them to do their best.

“This is becoming the perfect storm, as employees are saying ‘I don’t know what my company stands for, I’m not getting the information I need to do my job well, and I’m worried about my future,” says Shadle. “We think it’s a wake-up call but also a real opportunity for management to reset the internal communications agenda, by proactively identifying the true barriers to engagement – the ones that matter most to employees -- and addressing them directly.” 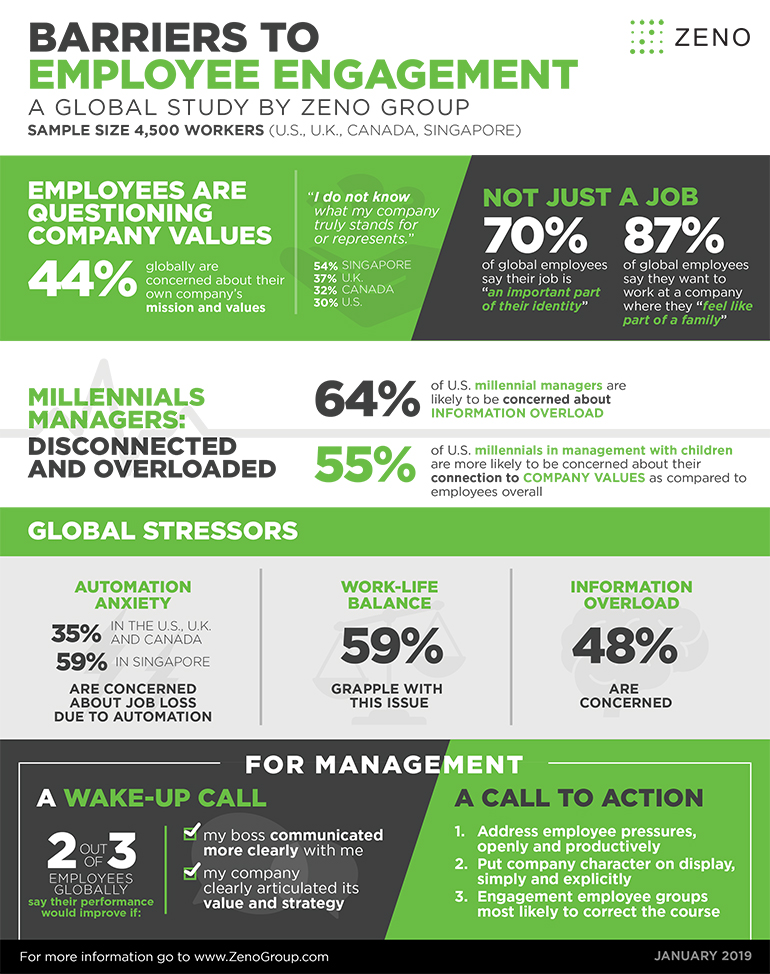 Zeno surveyed more than 4,500 employees in Singapore (1,000), Canada (1,000), the United States (1,500) and the United Kingdom (1,000) asking them about their attitudes toward their jobs, the effectiveness of the communications they eceive to perform in their roles, and their specific concerns around current issues prevalent in the workplace.