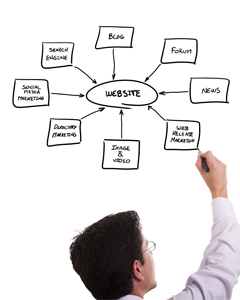 Magnaglobal, a division of IPG’s Mediabrands, released an updated global advertising forecast alongside a comprehensive model including data for more than 60 countries covering the years 2000 to 2016.

Following an 8% rebound in 2010, Magnaglobal forecasts that media suppliers around the world will grow their advertising revenues during 2011 by +5.2% to total US$428.3 billion on a constant currency basis, revised downward from their previously published expectations of +5.6%.

Long-term growth rates, however, are upgraded, reflecting stronger expectations for emerging markets through 2016, with compounded annual growth rate (CAGR) for the global industry of +6.8% over the next five years, compared to previous expectations of +6.3% in late 2010.

Video bounced back strongly in 2010 and continues to be the dominant advertising medium, claiming over 40% of the global advertising market.

Traditional television advertising is expected to grow 8.3% on average through 2016, gaining more advertising market share in North America, the world’s largest TV market, than in any other region.

Concurrently, Magnaglobal expects online advertising to overtake newspapers as the second-largest advertising medium by 2012, reaching US$129 billion in 2016. Technological advancements in ad serving, targeting and measurement, improvements in search quality, and rapid growth of social media will all help the medium attract more investment.

By contrast, print media will see renewed weakness in 2011, with a slight decline in revenue for the sector compared to previous expectations of positive growth of less than 1%. Over the next five years, however, newspapers and magazines collectively should grow 1.6% on average, an upward revision from a previous estimation of 1.2%. In many emerging countries, particularly in those where literacy rates are rising and the threat of online substitutes remains limited, newspapers remain a popular medium to distribute content to consumers. 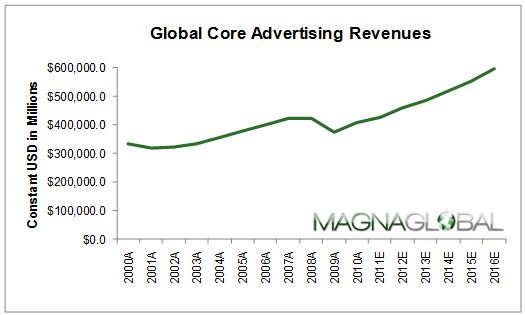 Radio estimates remain largely unchanged, but out-of-home should continue to see relatively more favorable trends, which will help make it the second fastest growing medium after online over the next five years.

In dynamic USD terms – important to a media owner or advertiser who does not hedge currency exposure – global advertising will rise by +9.2% during 2011, and continue to grow by a CAGR of +8.1% through 2016, assuming a depreciating US dollar against most other currencies over the next five years.

Advanced economies are showing signs of weakness this year as they confront several headwinds.

In the US, the world’s largest advertising market, manufacturing activity is stagnating and retail sales missed market expectations in May. The recent economic weakness may be protracted in light of a depressed housing market, sluggish employment conditions, and fiscal retrenchment at all levels of government. Therefore Magnaglobal adjusted their forecast only slightly downward to +2.9% in 2011 from +3.1% previously, excluding the impact of political and Olympic advertising.

Developed markets in Asia Pacific are also showing some signs of a growth lull. Japanese exports declined 9.3% in the first 20 days of May compared to a year ago after two months of declines. While this may strengthen the claim that its customers, the emerging economies, are also slowing, it is believed that the development of their advertising markets will offset any drag from slower economic growth, as reflected in the revised advertising estimates for Asia Pacific where growth slows to 8.1% in 2011 from previous estimate of 10.2%. However, over the long term, Magnaglobal remains optimistic on these markets, which are forecast to grow 9.5% on average from 2011-2016, modestly above their previous estimate of 9.4%.

China’s advertising economy should grow 20.4% in 2011 to RMB188.7 billion or US$28.1 billion and become the world’s second largest market by 2012, worth US$33.6 billion on a constant currency basis, and expected to nearly double that amount by 2016, assuming the country’s currency is allowed to appreciate. 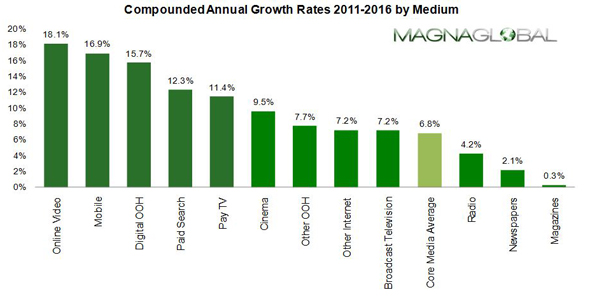