IDC Forecasts Security Appliance Market to Reach US$2.8 Billion in 2015 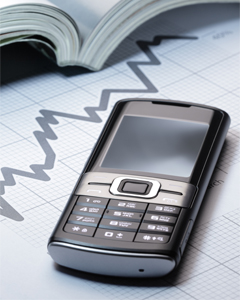 According to IDC’s Asia Pacific Quarterly Security Appliance Tracker, the security appliance market in the Asia Pacific region excluding Japan (APEJ) grew to US$318.2 million in factory revenues in the fourth quarter of 2010, which represents a growth of 6% from the same quarter in 2009.

Overall, the security appliance market enjoyed a healthy growth of 14% from 2009 and reached US$1.1 billion in factory revenues in 2010. The strong growth was largely driven by Firewall/VPN, Unified Threat Management (UTM), and Intrusion Prevention System (IPS) appliances.

"The year 2010 started off with overall enhanced security awareness, after a number of highly publicized security breaches made the news headlines. This increased awareness of security threats drove firms to spend more on security appliances helping make 2010 a good year. Recent security breaches have fuelled significant growth in the number of security offerings and standards in the marketplace. Organizations have to protect sensitive information and, in many cases, need to fulfil specific regulations to ensure the proper safeguarding of information," says Naveen Hegde, Senior Market Analyst of Asia/Pacific Software Research at IDC. "This is why many CIOs do not consider security as an overhead function but as a revenue driver. In short, they need to spend on security products for sustainability of the business."

The global provider of market intelligence and advisory services for the ICT technology, further states that the content management market, which includes Web and messaging securities, has registered a strong 48% year-on-year growth in 2010.

Web 2.0 presents a significant information leakage challenge for enterprises which need to deal with social media risks as well as compliance driven demands. The trend of users choosing cost effective and easy-to-manage security appliances with combined functionalities continued in the region. Thus the UTM market saw a 16% year-on-year growth. IPS market grew 13% for the same period. 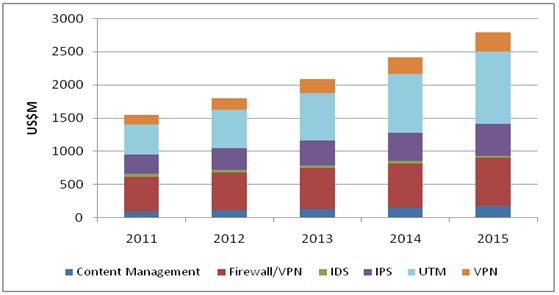 The security appliance market in Asia Pacific is set to grow to US$2.8 billion by 2015 in customer revenue at a compound annual growth rate (CAGR) of 15.6%, representing the quickest and fastest growing region. IDC expects the growth to be strong especially in emerging markets like India, China and ASEAN.

Security is mission critical and increases in complexity of infrastructure, making CIOs and end users in all industries working to optimize it. The UTM function is leading the demand curve taking a share of 39% of the total security appliance market by 2015 as against 27% in 2010.

The expert Hegde adds, "Security is one of the hottest technology concerns today - and with good reason. With the continuous maturing of the Asia Pacific market, the growing number of highly publicized security breaches and threat events that impact awareness and revenue, IDC expects the security appliance market to enjoy healthy growth across various market segments, particularly in the UTM, content management and IPS segments."