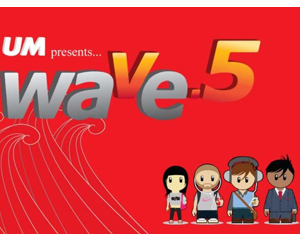 When talking about online marketing we clearly have to deal with social marketing, which has already broken through to the mainstream.

The phenomenon started to get attention in the past few years and nowadays seems simply unstoppable. Companies have started to integrate their social media activities into broader marketing initiatives, learned how to scale their efforts, and demonstrated return on engagement. That’s quite an achievement, taking into consideration that it is not easy to create and maintain a genuine face and voice for a brand.

In 2006, the global marketing communications agency UM, released a report on the scale and impact of social media, called ‘Global Impact of Social Media’ and reframed and expanded it in the following years. What started of as a ripple (Wave 1) in 2006 has really grown (Wave 5) into the “biggest” social media study in the world in 2010, with 37,600 respondents from 54 countries. The agency has just unveiled the findings of their “world’s largest and longest-running examinations of the impact of social media on today’s global marketplace” last week and the gathered data seems to be a real information goldmine for brands attempting to foster connections with their target groups.

The full Wave 5 survey is a massive report and therefore at this point I only present the ‘10 Myths about Social Media in Singapore’. Although the list of 10 myths has been compiled using Singapore data, it has in many ways global relevance and gives a good impression of the quality of the report.

Social networking sites are a one stop venue for self expression, entertainment, and content or knowledge sharing. In other words: a social network is not just connecting with friends anymore - it’s much more beyond that. UM expects social networks to become a kind of aggregator with even more built-in functionalities that are employed by digital media users as a gaming portal, meeting place with friends, and a sharing point of views, pictures, videos, or opinions with others.

The moment we say social network we almost always imagine young people going to their Facebook profile, doing their updates and simply some chatting. According to Wave 5, however, that probably has still been true a year back, but transcends across all age groups now. In fact the age group of the 45-54 year olds, for instance, is the fastest growing in terms of penetration of social networks.

Nielsen Media Research confirmed that traffic is dipping when it comes to blogs, but what UM surveyed is that there is actually more of a shift taking place from personal and general topics to specialized blogs. The endless talking of individuals about themselves and general topics has lost its glitter, which shouldn’t be generalized for blogging in general. The success formula is ‘relevance’.

That’s a fair comment, but what UM found out is actually the sheer opposite, namely that a sweeping majority of users is still upbeat about it, with eight out of 10 saying they will continue visiting social networks to keep in contact with family or friends, or to manage their social networking page, or to visit an online message board or forum. So what we call “fad” is actually here to stay and to grow even more - some functions may die over the course of time, but new ones will also come up, therefore social networks surely won’t die.

Often people use their own personal opinions to make generalizations across media in general, which seems to be the case here. Wave 5 found out that consumers don’t really have a problem with having brands in the social network space. Almost half of all digital media users have joined an online brand community and what’s interesting about this is that about four in 10 have actually endorsed a brand, or became affiliated to, or even advocated a brand. These figures are very similar on the global level contrary to the popular belief of agencies. Brands just have to figure out how to add value – then people will willingly seeking brand communities and share their experiences with friends.

Myth # 8: There is a “Formula” for all brands on social networks

It’s not quite as simple: for different categories and different products there are rather different solutions and motivations. All have some common aspects of course, such as sharing, but every now and then you will find that there are polarizing differences. Keeping an eye on being relevant is crucial in social media, as well as going away with the erroneous belief that what works for one brand in one category is going to work across the board. To give you an example: what works for an FMCG brand on Facebook cannot be exactly replicated for an automobile brand, so you will have to tweak the way you design the page or the way you allow consumers or people to attract.

Wave 5 found out that brands want to play up more buzz, but are not really interested in garnering more buzz. Depending on which category a product or service belongs to, there will be more or less efforts needed to generate that buzz. This means you may have to go that extra mile or those extra steps to ensure that people are buzzing about you. For luxury products for instance, Gucci or Chanel, consumers typically look at the brand, which they put on a pedestal. In that case you have to go the extra mile and submit content to the social spaces, whereas if you are just releasing a movie, you are just opening a bay and you can allow pure user generated content.

Social media doesn’t necessarily have to be superficial, you can make it sound credible, which is of course always the marketers’ or the brands’ efforts. Interestingly, Wave 5 surveyed that half of the people are influenced by what they read and discovered further that people seem to be willing to believe what they find. Such people usually have a favorite blog that they track or read for certain pieces of information. Another finding of UM has been that 35% of people are inclined to think more positively about companies that have a blog. Do keep in mind that everything is subjective, so you definitely need to build-up credibility first.

A very interesting point taken from the whole study is that almost half of the internet universe already has joined some sort of brand community, which proves that there are clearly brand benefits, such as driving loyalty, sharing news or updates, or spreading general brand awareness. What’s needed is just a good understanding of the nature of social media demand, which is the key for its usage. So if you are looking for a holistic and social media point of view, take your chance and get in touch with those who seem to have more information than anyone else on the global picture of social media (http://www.umww.com/wave5) in all of its forms.