Touch-enabled notebooks are in demand according to IDC‘s Asia Pacific end user survey that indicates 82% of the respondents prefer it for their next purchase.

The company’s annual survey reveals that the usage explosion of smartphones and tablets, where touch screen is a prominent feature, is a key driver of taking these screens to the personal computer. The study of end user behavior and usage on client devices also finds that the majority of PC users today, even in emerging markets, own a smartphone, especially the 26-35 year olds that make up 87%.

However, from the survey that covered Australia, China, Hong Kong, India, Indonesia, Malaysia, Singapore, South Korea, and Taiwan, IDC finds that only 6% of all notebooks are shipping with touch screens in 1H13 for these nine countries.

"Reasons causing this glaring discrepancy include bad timing, as panel prices earlier this year were high, deterring PC makers from producing more affordable options," he explains. For that, PC makers have been progressively announcing their plans to launch more affordable touch-enabled notebooks in the second half of this year.

Another driver is the lack of touch-enabled applications, which is forcing users back to using legacy apps in the traditional desktop mode of Windows 8 rather than the touch-optimized modern user interface.

"While IDC believes that touch-enabled screens will eventually become the new standard of the industry, touch-enabled apps that are relevant to PC end users will be the crux of a much faster penetration in Asia,” says Andi.

IDC's infographic on the Many Faces of Personal Computing, gives an overview of the personal computing trends across Asia Pacific across multiple devices including PCs, tablets and smartphones.

Considering, that consumers in Asia-Pacific lead the world in the demand for mobile commerce and expect even more simplicity and capabilities, retailers should take advantage of this fact by encouraging customers to buy goods using their mobile phone by offering lower cost services, coupons and exclusive offers. (Source: IDC) 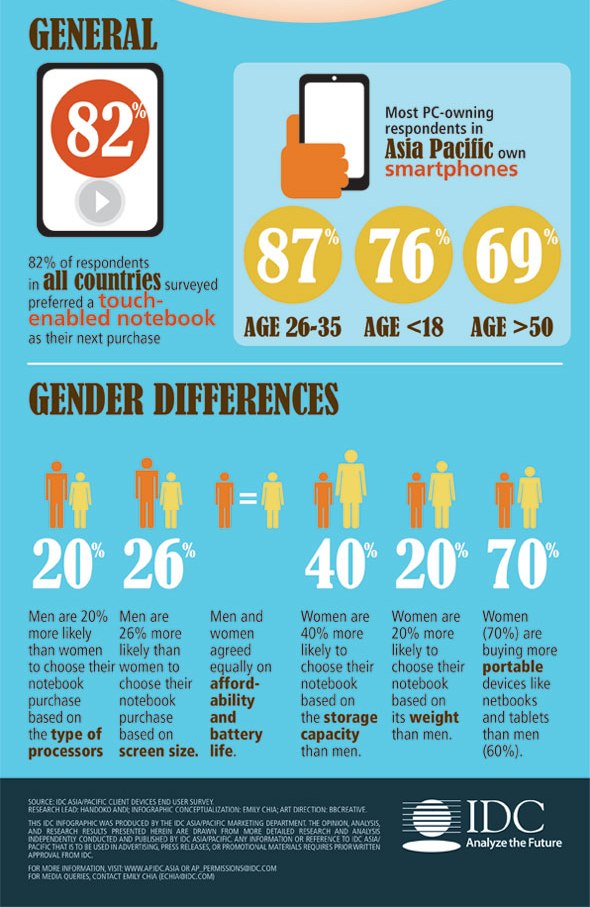