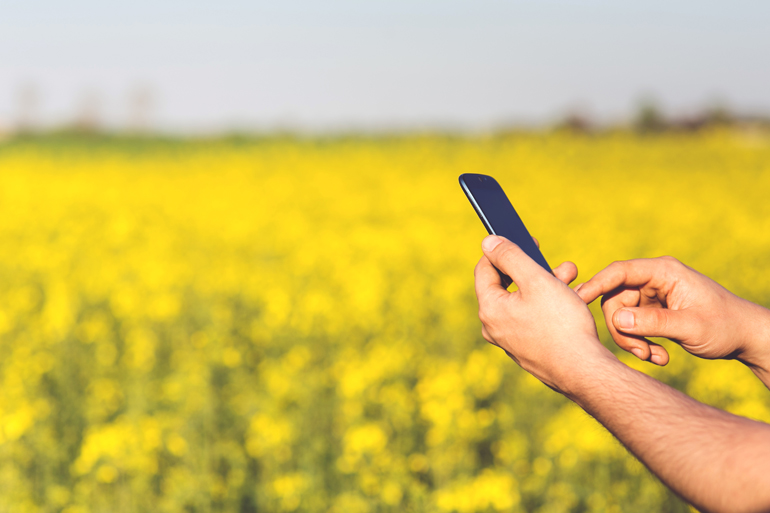 According to a GfK survey of 22 countries, Russia and China have the highest levels of people online who agree strongly that it is important to them to be always reachable, wherever they are, standing at 56% each, followed by Turkey at 53%.

These are the only countries surveyed where more than half of their connected consumers agree strongly with that concept. Mexico comes close, with 50%, but then there is a big drop to the next closest country, namely Poland at 41%. 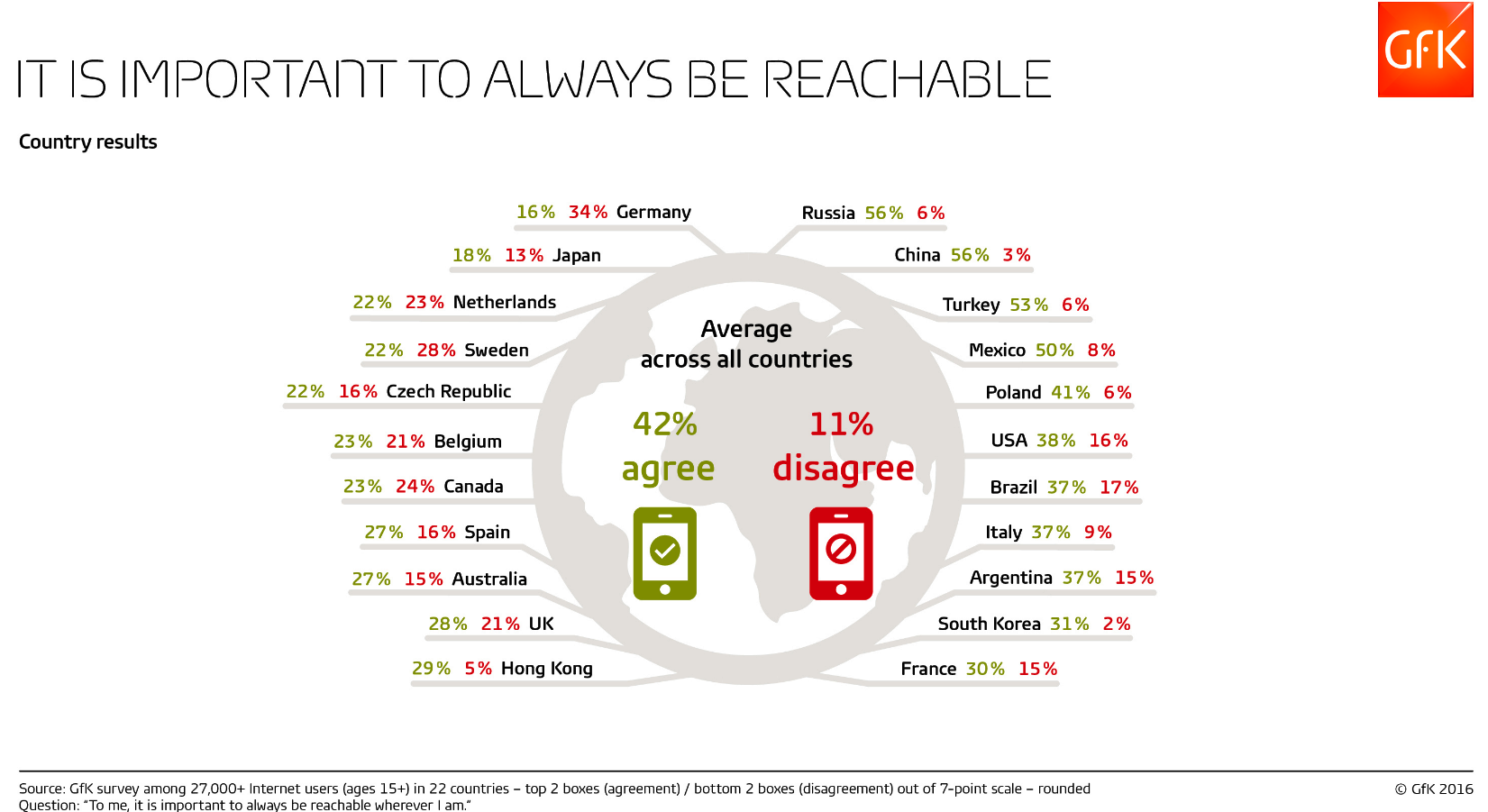 Running against that international trend are Germany, Sweden, Canada and the Netherlands, as these countries are the only ones in the survey where greater numbers firmly disagree than agree with the idea that it is important to be always reachable. 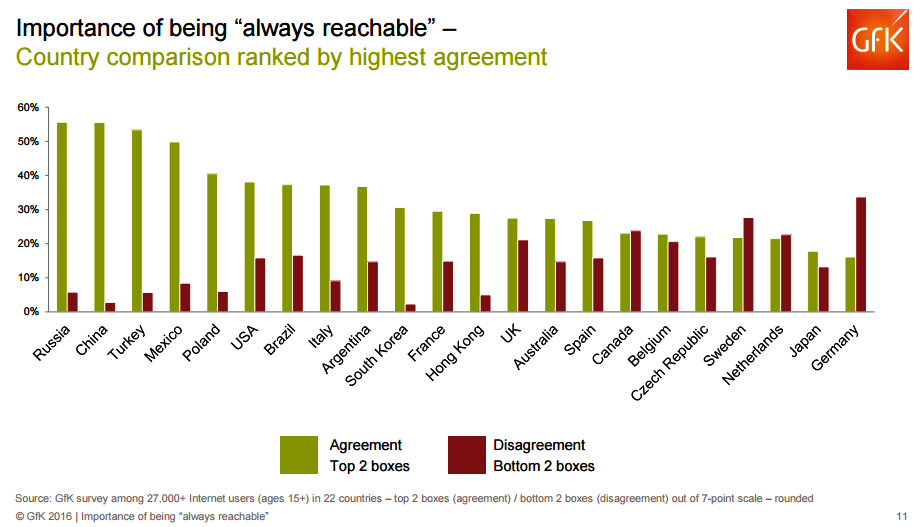 Zooming in on the Asia Pacific region, it becomes clear that for Chinese Internet users (56%) it is most important to always be reachable, while other Asian countries are more in the middle range - South Korea (31%), Hong Kong (29%), Australia (27%) – while Japan (18%) thinks like Germany and doesn’t feel the urge of being connected all the time.

Amongst the different age groups, people in their thirties show most leaning towards wanting to be always reachable - standing at nearly half (47%) firmly agreeing that it is important. Next come those in their twenties, at 45%, followed by teenagers (15-19 years old) at 43%. Those in their forties run a very close fourth at 42%. However, for people aged 50 and over, the perceived need to be always reachable drops off significantly - standing at a third (33%) of those in their fifties and just 29% of people aged 60 and over. 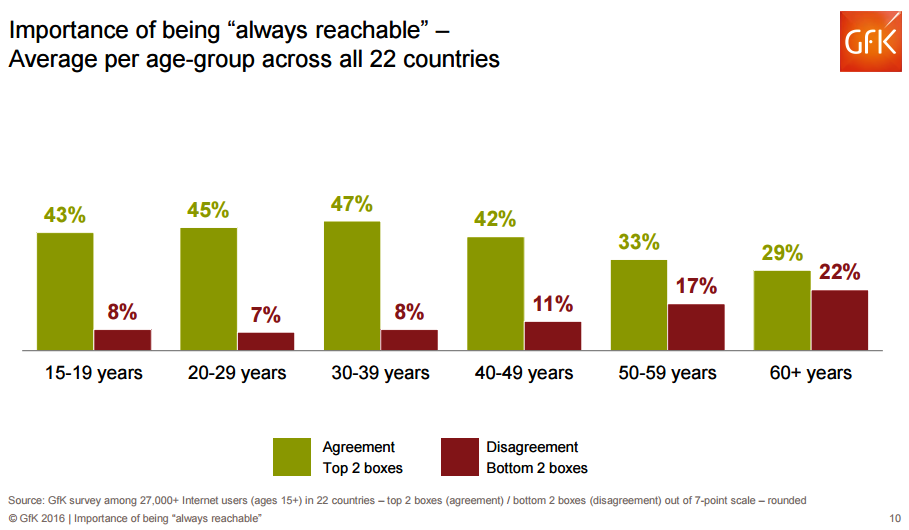 "Always reachable" demand is only slightly higher among women

Looking at the difference between genders, women are slightly more likely than men to see being always reachable wherever they are as being important (43% women vs 40% men).

When it comes to those who firmly disagree with it being important, the difference is even narrower, standing at 10% of women and 11% of men. 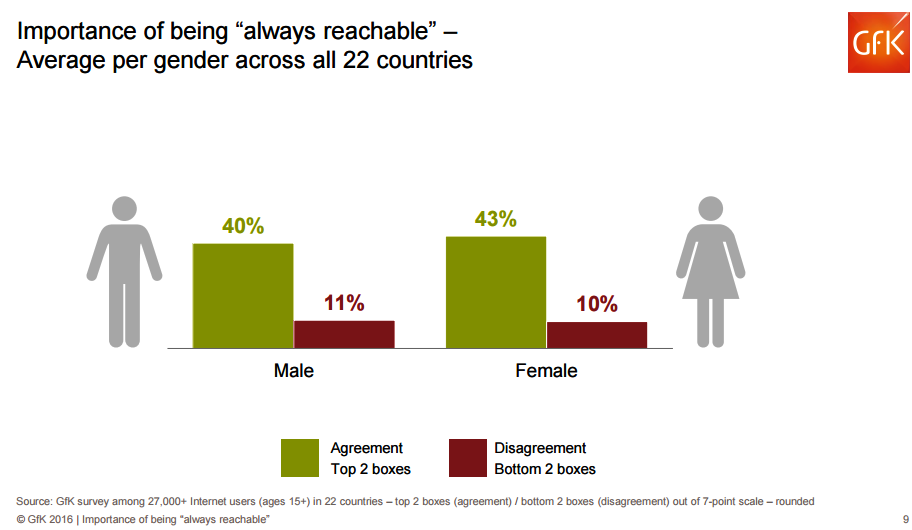 You can download the complete findings for each of the 22 countries by visiting http://www.gfk.com/global-studies/global-study-overview/