The Role of Video in Modern Content Marketing Strategies 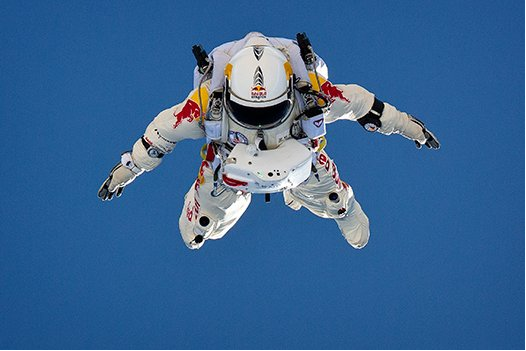 Can you imagine what the Red Bull Stratos Live Jump of Felix Baumgartner would be without online video? Well, in order to create content that people are hungry for, Felix Baumgartner’s 128,100 feet jump is one of the hottest examples of video content marketing done right. The most popular video on YouTube has been watched almost 5 million times and the event itself was watched by 8 million concurrent viewers according to Google.

50 countries across the world had live broadcasts about the incredible, spectacular skydive and can anyone count the comments, shares, and likes across all the social media sites? Not to mention Red Bull‘s own video channel. According to Twitter the event generated 3.1 million tweets.

The biggest leap was made by the Facebook page of Felix Baumgartner. Between the 13th October and the 14th October over 570,000 fans were generated. On that day, the Red Bull Stratos page added up to 270,000, while Red Bulls main page generated only 80,000 new fans on that day, which is quite a normal number by having already over 32 million fans.

Actually, really impressive that Felix Baumgartner’s page grows by 515% over the last 7 days. The Red Bull Stratos page anyhow reached a fan growth of 124% within a week.

Furthermore, quite interesting are the numbers of People Talking About. If you look again on the fan numbers you can easily see how amazing these absolute numbers of the people talking about metric are. Although Baumgartner’s and Stratos Facebook page have over 30 million fans. less than the Red Bull main page, nearly 288,000 people talking about them, while Red Bull reached only 440,000 people in total.

According to Nicola Kemp on marketingmagazine.co.uk, there are six marketing lessons to be learned from Red Bull Stratos, which I summarized in the following for your convenience:

1. Embrace a sense of purpose

Red Bull Stratos has not only underlined the brand’s authentic link to extreme sport and innovation, it has also provided its employees with a motivation bigger than selling sugar water (or energy drinks for that matter) for the rest of their lives.

2. Do more than grow your bottom line

‘Red Bull has taken science forward and no one is questioning it. Whether you agree that this will benefit NASA or not, there is no doubt that it is fuelling a passion for science,’ says Sav Evangelou, executive creative director at Kitcatt Nohr Digitas. Sean Kinmont, managing partner, creative director at 23red, says “People can be inspired by feats like this one, which take them vicariously into self-realization, courtesy of the brand”.

Space exploration appeals to noble human interests: the desire for adventure and a belief in the power of science. James Kirkham, managing partner at Holler, says that for a certain generation Stratos has become an ‘I was there moment’, which has created ‘almost an unfair benchmark’ for marketers. Red Bull itself has blocked agencies involved in the project from talking to the press, because it doesn’t want the event to be viewed as a marketing stunt.

‘The industry is obsessed with media coverage, but the real opportunity is earning the right to speak to consumers. Red Bull did this by capturing the imagination of millions of people,’ (Evangelou).The message is clear: to be truly great, brands must transcend ROI.

Of course, not every brand has a fearless Felix to deliver moments of greatness, but you cannot ignore the pace of change in the market. Russ Lidstone, chief executive of Havas Worldwide London, says that with Stratos, Red Bull has in effect created a school of extreme marketing.

Red Bull has built credibility through its support for extreme-sports athletes, the creation of current F1 champions Red Bull Racing, and through building a range of events from the ground up.

The Stratos project also hints at a wider shift in marketing in the digital age: it is no longer enough to obsess over brand valuation and image. Consumers are increasingly demanding that brands prove their worth - a shift that has huge implications for marketers. Patricia McDonald, executive planning director at Glue Isobar, says that in an age of participation, brands are facing up to a fundamental shift. ‘Brands need to ask themselves what they do for people. It is bigger than marketing: from supply chain to distribution, it’s the fundamentals of how a business behaves’.

6. Place commitment above all things

Back on Earth, there will be probably some marketers rolling their eyes at the notion that they should ‘pull a Red Bull’. So here is the killer fact to empower each and every marketer: experts estimate that Red Bull’s investment in marketing is 30% to 40% of its revenues. It is a marketing-driven business model in the truest sense. If you won’t invest in your products and services, staff and brand, why would you expect your consumers to? You can’t use the struggling economy as a one-size-fits-all explanation for failing to commit and perform.

Marketers shouldn‘t get too intimidated by the Red Bull Stratos event. Just remember that content marketing really only makes sense if you create content which is either new and sensational, or really useful. For example, if you are selling cooking utensils, don‘t think about space missions, rather think about connecting with a star cook, and offer exclusive recipes with how to videos.

Another good example for using successfully video in content marketing is Maybelline‘s make up lessons. In Germany Maybelline sponsors the popular TV show "German‘s next Top Model“ which features commercial "Make Up School“ videos, and so making thousands of young girls search the internet for more advice.

So, you don‘t necessarily need highly professional equipment to make a good authentic film. A middle-class camera is often sufficient, if you have the right ideas, and the right software will help you with effective cuts.

Decide on the exact message you want to bring across and which viewer group you want to target with your video content marketing. And, get to the point, don‘t bore your audience by repeating marketing slogans.

Rather, keep your logo and brand visible while focusing on the content. Find a catchy headline, containing the keywords your targeted audience would most probably also use, for your videos.

Further keep in mind to make your videos available on all devices, at any time and across all operating systems. Make sure people can comment and share across all social platforms.

Video content is a powerful marketing tool for taking advantage of visual story-telling, if done right. The challenges you might face could be in terms of budget or talent.

Take it from me. If you haven‘t already started with video content marketing, what are you waiting for?