Muslim Pro is No 1. Islamic mobile app with over 10 million downloads globally

Muslim Pro, the comprehensive Islamic mobile application, just announced that it has reached more than 10 million downloads across 216 countries worldwide since its launch less than four years ago by Erwan Macé, the founder of Bitsmedia, who released it during Ramadan in August 2010.

The inception of Muslim Pro came when Bitsmedia CEO, Erwan Macé, felt that although there were many prayer time apps available, none were adequate enough. 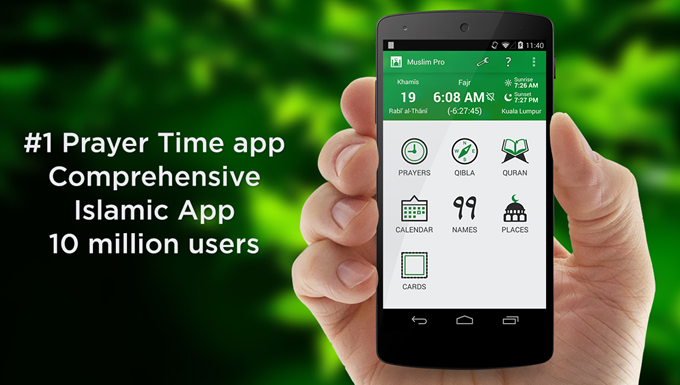 Muslim countries like Malaysia, Saudi Arabia, Indonesia and the United Arab Emirates, as well as countries with large Muslim minorities like France, the United States and the United Kingdom, have the highest number of downloads respectively.

Between 10,000 to15,000 new users are added daily, but during Ramadan, downloads can shoot up to as high as 100,000 in a single day. Interestingly, out of Muslim Pro’s existing user base of more than 10 million, it has an average of almost 3 million active users monthly. This means that Muslim Pro’s user engagement rate remains relatively high, being used by almost 30 percent of the people who have downloaded the app.

One reason is for sure the fact that besides accurate prayer times based on a user’s location, Muslim Pro provides many other main features such as worldwide Qibla directions, Azan clock, as well as integration with popular location based application Foursquare to find Halal restaurants or Mosques.

Therefore, the current number of users has definite potential for growth in the time to come, especially since smart phone penetration has yet to explode in emerging markets.

“Once smart phones have become a necessity in emerging markets like they are now for other parts of the world, we can expect the Muslim Pro’s user base to increase by up to 3 times,” said Bitsmedia CEO, Erwan Macé. “In addition to that, new platforms and additional community apps are always being developed, which will further contribute to an increase in downloads”, he added.

Overcoming both language and mobile platform barriers, Muslim Pro is accessible to the entire Muslim community worldwide, with it being the first Islamic app to be translated in 15 languages.

“Muslim Pro remains our core app, both in terms of revenue and team priorities,” said Macé. “We are in the midst of working on a few separate, yet related, applications to extend the reach of Muslim Pro beyond just religion — these further developments will help address Islam as a culture and a community as well.”