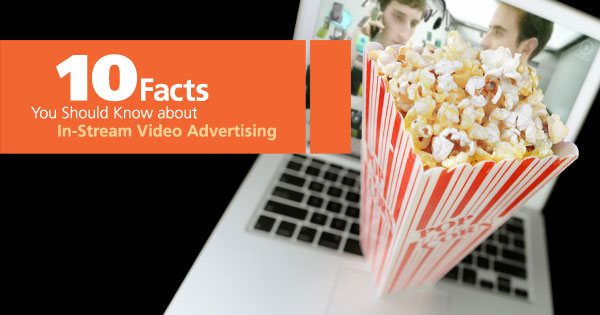 In-Stream Video Advertising represents a huge opportunity for advertisers. In fact, it’s one of the fastest growing segments of online advertising. Worldwide, around 200 billion videos are watched online every month, reaching a global audience of 1.2 billion people, according to comScore—which means In-Stream Video Ads have massive potential for reaching target audiences.

Mediamind presented ten facts about In-Stream Video Advertising, which we would like to share with our readers:

1. Users are 20 times more likely to click on In-Stream ads vs. Standard Banners

According to MediaMind’s benchmarks, the average Click Through Rate (CTR) for Standard Banners is 0.1%, while the benchmark CTR for In-Stream video is 2.15%, an increase of nearly 2000%. While clicks are far from a perfect measure of advertising effectiveness, they are a proxy for the amount of traffic that your campaign generates. The data suggest that video can be a phenomenally effective way to drive people to your website and get more traffic and eventually sales,

One of the main contributors to the effectiveness of a campaign is the time spent with the ad. The longer you see the brand in-front of you, the more likely you’ll remember it. With pre-rolls and mid-rolls (In-Stream ads that appear before and in the middle of video content, respectively) users must watch the entire ad before the content resumes. MediaMind’s analysis of millions of impressions shows that an average of 70% of In-Stream impressions play all the way through, and 75% play three quarters of the spot duration, providing plenty of exposure time for the money;

Branding is all about telling a story—something video can do like no other medium. Video ads can convey complex messages in a memorable way. According to research by Dynamic Logic and TubeMogul, video ads have some of the highest impact on brand metrics such as Brand Awareness and Brand Favorability, with consumer packaged goods (CPG) and financial services campaigns benefiting most from the format;

Online video spots and TV spots are two very different things. While conventional TV spots are 15 to 30 seconds long, most video ads, made specifically for the web, are 90 seconds or longer. Actually, longer online ads work better than the shorter repurposed TV ads, according to the Dynamic Logic and TubeMogul research, increasing brand favorability and purchase intent. Surprisingly, the longer online video ads also have a higher completion rate;

6. 37 million US households watch online video on their TVs

According to Forrester, 37 million U.S. households currently own a connected device that enables them to watch digital video on their TV screens—up from fewer than 25 million in 2010. Among these connected households, younger consumers lead the way, outpacing the overall population in adoption by nearly 20%. Forrester projects that connected device penetration will reach 50% in 2016, creating even more video consumption options and opportunities for digital advertisers;

7. Nearly 60% of US Internet users view online video at least once per week

8. People spend 4.5 hours per month watching video on their PCs and 4 hours on mobile devices

Advertising dollars are pouring into video advertising, and by 2016 spending is expected to increase from $2 billion to $5.4 billion, according to an estimate by Forrester. The research company credits this ascent to factors such as the increasing availability of high quality, brand-safe video content; the proliferation in video-friendly devices; and the maturing of younger, online-adept consumers.

In-Stream video is getting results for advertisers—in terms of clicks and brand metrics. The proof is in the advertising spend, which is growing at an astonishing rate. As online video commands a more prominent place in living rooms and a larger share of people’s time, online video advertising will likely become a standard component of mainstream campaigns. If it’s not at least on your radar, you may be putting yourself behind the competitive curve.