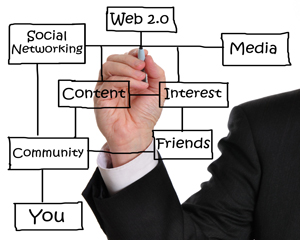 It’s once again the time of the year when speculations and discussions on the probable online trends for the next year are kicking in. Which topics will dominate the media, what kind of technologies will be in the limelight or similar questions are usually of common interest.


As expected, social media is on the trend list this year as it enables marketers to reach potential target groups in a completely new way. Characteristics of social media marketing are the active involvement of users in designing brand messages as well as pushing its viral spread. Of course this works only if users are really convinced of a brand, do not feel exploited for advertising purposes and discover personal value. Members of social networks are mostly interested in news and innovations and like to get surprised. They are among the early adopters, and transmit information after a personal assessment to their friends and associates. This gives them recognition in the narrower and wider circle of friends, are directly related to the content providing companies and feel respected in their opinion.

According to IDC, traditional corporate culture remains the largest barrier to successful social media initiatives today, simply because social media challenges disrupts the hierarchical management model of many organizations. So let me present you here the different operational challenges organizations face to effectively deploy and manage social media initiatives as well as some hints on what to avoid to be successful with the new Internet-based tool that allows for groups to engage in peer-to-peer conversations and exchange content - including video, audio, text and multimedia, which is then published and shared within a social environment.

Without doubt, the emergence of social media has generated a new and innovative way to create dialogue and receive useful feedback in a way never before thought possible. Think about platforms like Facebook, Twitter, YouTube, Blogs, or Flickr and the impact it had in recent times.

But even the most experienced early adopters of social networks had a few lapses along the way before they could use the tool well. Luckily, best practices are slowly turning up as social media becomes more widely adopted. Indeed, it starts to be almost unacceptable for big brands not to have a social media strategy in place – it’s simply essential, even if it is less-than-perfect. An advantage with the growing world of social media is that most likely boo-boos will be forgotten faster than before. But why not avoid regrets by learning from the common mistakes made by others? Read on to discover what you avoid doing in your social media campaigns.

The mechanisms of the so-called word of mouth advertising are from a business point of view really important as it is in general beyond a company’s direct control. In particular, negative opinions which tend to remain sometimes for years documented and commented on the Internet, have a greater impact on purchasing decisions than in the offline world in which emerging rumors or negative messages about products and services quickly fizzle out over time and thus fall into oblivion.

The fact is that you can’t control online discussions about your company or brand. As in real life, people will talk about you whether you like it or not. If conversations are already out there, you should at least be part of it – especially in cases of big/ground-breaking news or a scandal. People simply expect then a response or an explanation and if you wait too long to chime-in, or worse, don’t say anything at all, people begin to speculate and create their own truths.

DON’T have too much “me” in your social media campaign

Keep the purpose of social media in mind, namely interacting with other people via the Internet. Be careful not to spread information on your latest advertisements only as a monologue as this is usually boring. Instead, you should encourage conversations and discussions, which is pretty hard to do when doing promotion for a product or service at the same time. Of course, there is nothing wrong with sharing coupons or other deals with your followers - in fact, this is one of the reasons that people follow brands on Twitter – so it’s best to make the offer exclusive to your followers only. By rewarding them, you will gain an increasingly bigger group.

Believe me, worse than no social media presence at all are profiles that were created and then forgotten. According to a Purewire study, 80 percent of all Twitter accounts have fewer than 10 followers and 30 percent have zero followers. One quarter don't follow anyone else. One reason for this phenomenon could be the fact that people want to make sure that nobody steals their username. Of course there are especially brands that are worried about others that might cash in on what they see as their rightful name. In fact it isn’t really easy to get a username back on Twitter, compared to Facebook, YouTube, or MySpace.

The progress and results of your performance can potentially reach millions of individuals on social networks, so actively monitor social media, with for instance Nielsen's BuzzMetrics or Radian6, or other useful tools that can help you track online conversations and monitor them for potentially damaging conversations that can prevent a fiasco. Of course it can be used to watch praises of your company as well.

When it comes to social media everybody has a voice and can start a dialogue and bond directly with a brand, ask it questions, and become part of its decision-making process. However, what makes social media great can be frustrating at the same time, simply due to the fact that everybody can say nasty things, too. The only solution to this problem is moderation, which means if somebody writes something potentially damaging on your Facebook wall, @replies on Twitter, or leaves a comment on your blog, you have to react as soon as possible. So, if the comment is factually incorrect you have to provide a correction or if it is a complaint, offer to provide a resolution. Remember that if one person has posted a question or a complaint, it's likely that many others who haven't yet posted feel the same way. People understand that nobody is perfect, so quickly admit mistakes if they are discovered and set it right as soon as possible to prevent a social media fiasco.