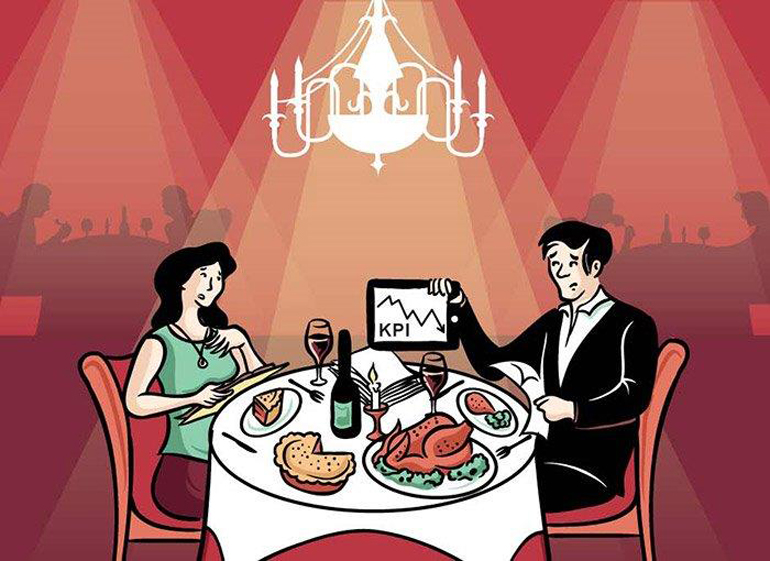 It’s Friday night. The city’s finest restaurant is bathed in candlelight, while a couple clinks to ten years and sips on overpriced champagne. This evening was long awaited; the prospect of some adult conversation was worth the logistical gymnastics required to get the kids babysat. One partner looks into the other’s eyes, lingers lovingly over the pregnant pause and then launches the opening statement as planned: “Honey, thanks for joining me for your annual performance review. I’ve been looking forward to examining how you’ve gone over the past 12 months.”

For the next two hours they dissect and label productivity in graphs and numbers. One partner went from a 4 to a 5 in delegation, but…then again…that bout of toast burning in the month of March knocked domesticity down to a 3. All in all, however, the score was sufficient; the meeting productive; and the dessert delicious.

Sound sexy? We don’t think so either. It lacks a certain…heart, don’t you think? And yet, when we’re honest about the way most organizations handle their people, it’s really no different to this. It just lacks the decadent dessert at the end.

The reality is, most of us enjoy our annual performance reviews as much as we do a root canal. With the exception of those rare (and rather odd) eager beavers in any organization, we usually don’t look for opportunities to be pried open and dug into on the operating chair. It’s awkward; ambiguous at times, and can be very painful. Unsurprisingly, companies are starting to question the value of the annual performance review, exploring a more natural alternative for keeping fingers on company pulses.

As we’ve been examining their new normal, we’re getting more convinced than ever – that they’re onto something. Here’s why…

From annual to everyday

The annual review has been called a rite of “corporate kabuki” when it comes to offering honest, constructive and real time input. Once a year the manager sits down to discuss the should’ve, could’ve, would’ve of your performance that year, but by the time six months prior is behind you, it’s too late to learn and grow from it. The moment has already passed – and rather than it being used as a real-time lesson to springboard change and innovation, it now feels like a lingering slap on the wrist.

It’s a constant case of rear view mirror gazing, when we should in fact, be looking forward and focused on getting future ready.

The point is this: if our organizations are meant to be organic, shouldn’t they be breathing? Since we’re dealing with human beings, after all, shouldn’t our systems operate along the natural rhythms of human relationships and interactions? Isn’t this all really about connecting with colleagues and working together to deliver great outcomes for clients and our businesses?

Adobe came to this conclusion in 2012 when they switched to a more agile system that made honest feedback a regular part of the workday. Managers and employees now start the year by co-setting mutual goals and articulating expectations. From there, assessments are real time and ongoing. Constructive criticism or recognition is shared immediately, so that both parties can respond and adapt to what’s needed, and at the end of the quarter, workers receive an overall recap of strengths and opportunities for development. It’s far more intuitive, in the moment, and it’s proving very effective.

From numbers to conversations

What could be dealt with quickly over a cup of coffee has become an ode to endless paperwork and obscure evaluation criteria. And, the idea of people – complex and emotionally unique beings – being reduced to a number, doesn’t exactly fare well.

“If you’re trying to motivate people, assigning them ratings (especially when forced on a bell curve) isn’t a great idea,” says HR Consultant Mary Jenkins in her coauthored book Abolishing Performance Appraisals. “Studies have shown over and over again that people simply think they perform better than other people. Unless you rate someone in the highest category, the conversation shifts away from feedback and development to justification.” It invariably becomes a martial arts-like exercise of self-defense and justification.

That’s why Juniper did away with the labelling and rating system and embraced a more human-centered approach amongst their people. ‘Conversation Day’ is part of the new normal, where employees and their managers discuss the contributions and aspirations of employees for the future – where the concept of passing or failing is irrelevant, and the focus is on possibility rather than pointing out problems.

Steven Rice, Juniper’s Executive Vice President for Human Resources says, “There’s no label associated with any individual, so from our perspective, there is no formal or traditional performance management process in the company.” Juniper made the brave, but somewhat ‘messier’ decision to respect and engage people, rather than number them.

From measuring to motivating

Research firm CEB found that the average manager spends more than 200 hours a year wading through performance review paperwork. Those hours, along with the costly technology required (and not to mention the wine it takes to get through!), add up to roughly $35 million a year that a company of about 10 000 employees will spend on annual performance reviews. This is just mind boggling!

Imagine if future managers were utterly passionate about the people they work with, where the why would be just as important as the who and what at work. If leaders were to adopt this kind of inclusive, human-centered approach across the board, taking the time to lean in and really understand their people, articles like these wouldn’t need to be written. It would be dead obvious: annual reviews would become redundant, and meaningful and purpose driven conversations would be the new order of the day. Sounds brilliant!

But wherever you stand on the issue, it’s good to ask if what you’re doing now is actually working. Chances are, if your systems are essentially saying, see you in 11 months, you could be doing it much better. After all, keeping your finger on the company pulse means you keep it there every day.

This glimpse of the future has been published originally on Aurecon’s Just Imagine blog.