The 2013 iteration of the survey used the firm’s  proprietary online consumer panel of 13,000 active smartphone users from countries including Australia, Brazil, Canada, China, France, Germany, India, Italy, Russia, South Korea, Sweden, United Kingdom and the U.S. to get a real-time view on how they’re using their handsets.

The project examined the ways in which people across all markets use their mobile phone. These four native behaviors of connecting, socialising, entertaining and shopping were consistent across the research and the world. The study goes on to outline key advice for marketers who wish to use mobile in the most effective way to reach their brand’s target audience. The most recent consumer re-contact on mobile use across a range of activities has shown exponential growth since Initiative published its first Mobile Experience Study in 2010. The 2013 results demonstrate that smartphones are now taking a central role in the average consumer’s life and activities.

Remember, it’s a phone…but much more

Connectivity remains a critical part of the smartphone user experience with 32% of respondents listing emailing and voice talk as a primary usage for their phone. However, one of the most notable insights for marketers was that 71% of people claimed to have a branded application on their smartphone with 67% checking it daily. Another important statistic for retailers was that across the world 25% of respondents claimed they use their smartphone to post updates or comments on what they are buying. So while it remains a phone…mobile devices are so much more.

Living in the here and now

Further, the study found that of all the applications consumers have on their smartphones, the most popular are social apps with 41% of people surveyed stating they now use their smartphone primarily for social networking.

This point is illustrated when we look at mobile’s impact on journalism. The emergence of “live reporting” allows people to report, in the moment, what’s going on in their lives. This presents marketers with tremendous potential to build on this by creating in-the-moment social surges. Brands now have the ability to live in the here and now and become integrated into the consumer’s new mobile world.

In order to exploit opportunities on the smartphone to their fullest, marketers must embrace two new mobile mindsets: boredom and multitasking. Usually the enemy of advertisers, the survey found that smartphones actually become more powerful when people are bored as they look for entertainment to pass the time. Likewise, the research discovered certain subject matters mobile users enjoy discussing most via their device with 54% of people talking about TV shows, 22% doing so more than once a week and 58% talking about brand ads. Gaming also was important with 44% of survey respondents claiming they play games at least once a day.

The final native mobile experience found was the role played by the smartphone in shopping behavior. While there are naturally variations across different markets, it is essential that marketers take note of the gains that can be made from the mobile phone serving as the only touch point that connects what happens before people go in store, to the point of sale.

The research showed that the more people browse on mobile, the more they shop on mobile. Interestingly, more than 50% of shopping that is done via mobile is done while people are relaxing at home, presenting an opportunity for marketers as it allows them to connect all four of the native mobile experiences outlined in the study. 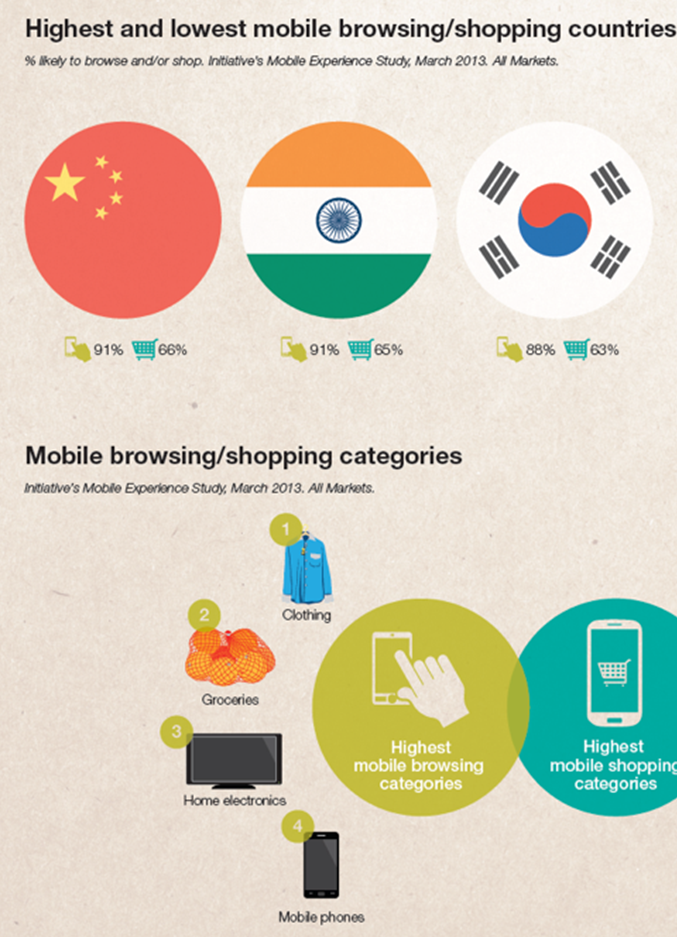 If this has caught your interest, don‘t miss the full Mobile Experience Report at www.initiative.com, as a lot of useful graphics and tips can be found there, too.