There is plenty of mobile opportunity out there, but Asian and European consumers have different preferences

The report also found out that Android and iOS are becoming more dominant, together accounting for more than 90% of smartphone traffic. Companies should therefore focus their mobile marketing efforts around these two systems. The other mobile operating systems only hold a few per cent of the market share. Where tablet traffic is concerned, iOS is market leader with 77% of the market share followed by Android which almost fills the remaining percentages. Other tablet OS make up only a few percent in all the six countries (US, France, Germany, UK, Japan and China) the report looked at. 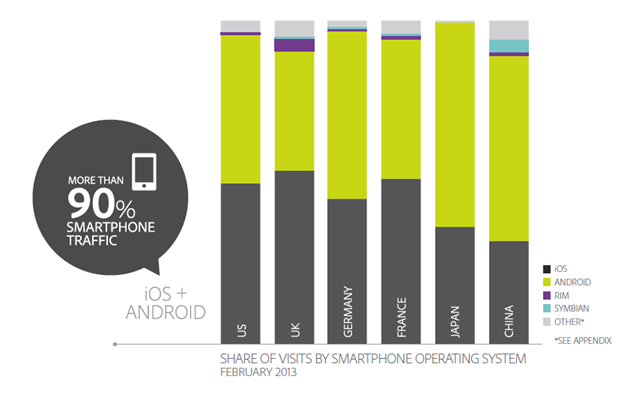 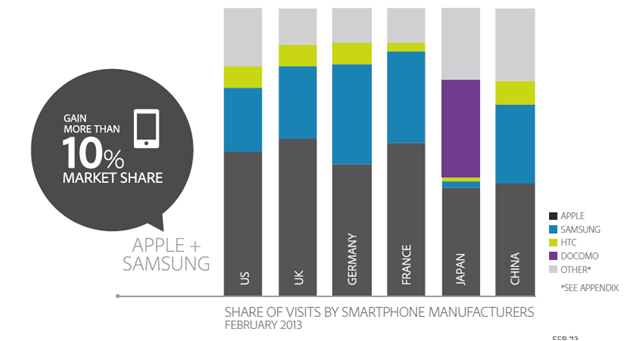 Digital magazine readership also enjoys steady and astonishing growth, with a 200% average growth just from August 2012 to February 2013. It doesn‘t come as a surprise that 75% of reading sessions occur on tablets, and that the reading frequency and the length of sessions is longer on tablets as well.

Mobile video is also growing fast and actually tripled in just one year (from Q4 2012 to Q4 2013) on both smartphones and tablets, in which consumption of video by tablet is slightly stronger than by smartphone. According to Adobe, the growing mobile audience provides incremental engagement and revenue opportunities for advertising. Tablet viewers, in particular, are early adopters who typically spend more money, book more trips, and consume more media content. Publishers can capitalize on this target audience with high CPMs and incremental impressions.

Adobe also emphasizes the close relationship between mobile and social, stating that mobile consumers are happy to connect to social media via their smart devices as social user experiences on mobile are getting better and better. Meanwhile one third of all „likes“ occur via a mobile device and the mobile share of new page likes grew from 4.8% to 30.1% in just one year. Thus, savvy marketers should make use of the opportunity that the natural affinity between social and mobile brings.

When shopping online, consumers use tablets like a PC to compare products and make the purchase and smartphones for quick references, like price checks and finding store locations. However, conversion rates on tablets are three times greater than on smartphones, and tablet conversion rates still don’t match those of PCs. Differences in conversion rates point to the use cases shoppers have in mind when they choose to use a tablet or a smartphone. Therefore, retailers should not treat all mobile visits the same.