Irdeto: trust in business partnerships counts, as there is no such thing as impenetrable security

During the CommunicAsia/BroadcastAsia 2013 show in Singapore, Irdeto held an interesting media roundtable where their spokespersons put forward their point of views on how to protect media against theft and piracy, besides trying to find answers to what is holding APAC operators back from multi-screen success.

Irdeto’s CEO, Graham Kill, as well as Bengt Jonsson, VP Asia-Pacific, and Ben Gidley, Director, Multiscreen Solutions conjointly presented their deep insights not only from a technical perspective, but provided lucid explanations to the issues.

Since the knowledge and issues covered by Irdeto during our meeting were so vast, I decided to come up with a two-part article to do Irdeto justice. Thus, let me introduce you to Irdeto’s solutions for the ever-changing threat of piracy and cover the company’s multiscreen solutions in the issue next week.

Piracy is not a single behavior, but rather a continuum of behaviors

According to Irdeto one needs to be aware that a number of different departments within an organization deal with piracy issues in some way, including legal, operations, marketing and distribution among others. Depending on their role, each group focuses on a specific aspect of piracy that is most relevant to their function. For example, legal teams might be concerned with protecting intellectual property and trademark rights, while operations take a view of protecting the actual asset through content protection security, and business divisions make decisions about release windows and channels of distribution.

Due to their different areas of concern, each group has its own perspectives on piracy, but in order to be really effective, all need to work together to manage the issue, although that seems to be almost impossible. Irdeto suggests here to take smart steps that increase the likelihood of consumers accessing legitimate content and to manage piracy in an effort to reduce the pace at which it proliferates. For them, piracy is not a single behavior, but rather a continuum of behaviors that comprises six different groups of pirates:

2. Hackers – “Let’s see how fast I can crack the security”

4. Frustrated Consumers – “I want to buy it but it’s not available”

6. Consumers – “I’m happy with the content I already pay for or get for free.” 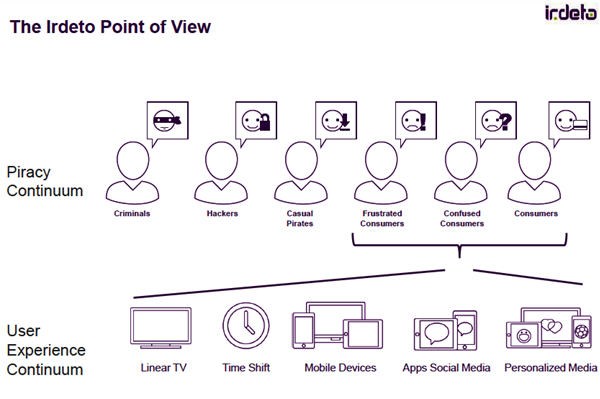 The industry has traditionally looked at consumers and hackers as singular groups, but by breaking down these groups further, specific issues and trends can be identified and solutions can be created, according to Irdeto.

Interest in video, for instance, is at an all-time high right now due to the fast-paced technical progress of mobile devices and the market is highly competitive. Graham Kill points out that research proves that the first device most people own in Asia is a mobile phone. That’s simply for the reasons that it is personal, does not require an installation, is easy to understand, has a low penetration barrier to consumers, and allows consumers to be connected to the internet. Bengt Jonsson agrees by adding that consumption is predominantly from mobile devices, when you look at the market today.

There is less respect for intellectual property in Asia, based on cultural differences

According to both spokespersons of Irdeto, piracy is in somewhat different in Asia as there is culturally less of a respect for intellectual property.

Graham explained: “You know in Europe and the States people have developed laws and rules which have shaped people‘s views about intellectual property and support the protection and upholding of intellectual property. In countries that are much newer in sophistication of their laws, it is not surprising that there is an asynchronous situation with society and the laws that prevail. However, I think that is changing rapidly. Everything in Asia happens in a sort of fast forward. Things that have taken decades to establish in the West, can be established much quicker here. China, which is being held up as the great bad guys in terms of piracy and respect for intellectual property, is rapidly changing, too. Domestic businesses want the same type of protection for their intellectual property as the foreign businesses do, as people begin to respect Chinese brands. It is changing not overnight, but it is changing for the better. It‘s the same playing field for everybody: you go into the pitch, you know its muddy, you need the right type of footwear to go and play the game. That’s where our robust technology and all the investigative work we did and do come into play.” Since it is their job to track and trace to stop piracy from happening, Irdeto “comes onto the pitch with the right type of footwear, where some of their competitors don‘t.”

According to Graham, Irdeto tracks the illegal use and distribution of copyrighted content on the Internet and notifies the Center for Internet Security (CIS) and Internet Service Providers (ISPs), stating: “We have very good relationships with ISPs, and they instantly react to our notices and take down the service that is propagating content illegally. For other clients, we track the usage of those assets and find instances of piracy for them.”

The company provides insights into requests, in terms of the number of people watching illegally, to consider ways to address the demand with legal services, In fact, a lot of economic decisions have to be made, according to Graham: “If you are a studio, you have to weigh the benefits of a delayed release versus a same-day release, as there is usually an advantage in launching content much quicker as otherwise there is a tremendous amount of piracy.“

“The way we do it is, that we listen to our customers”, Graham states, adding: “Of course we have the benefit of being a global business. And we appreciate listening to our customers and engage them in the discussion about their future direction to pick out from all those early indications of the future which ones will be part of the mainstream future and building that into products and services and technologies. You have to be ready with it before your customers want to make that choice. The other thing we like to do, is that we use the concept of scenarios a lot that help us to organize our thoughts. Besides, such setups can show us if we are sufficiently robust to survive those different scenarios and take advantage of them. So that helps with the longer term planning, for instance, the turn of the century we made early investments in software security and we made an investment in technology that now is the underpinning of our software and used by 6 million subscribers under management and the number is steadily growing every day. You have to have a long term perspective.” 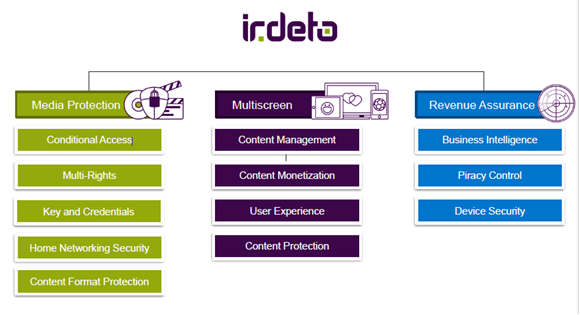 Irdeto’s CEO is quite aware of the fact that it’s a very fast moving world out there, confirming: “There are huge fundamental technological changes, distributed architecture using the cloud with a much more open source type of software, an increasing amount of functionality captured in chips, changing computing power as well as a changing competitive landscape. In fact, there are multiple dimensions of change. You can cope with it if you remain incredibly agile with everything that you do and you‘ve got to be prepared to experiment. We‘ve been innovative over the years, we‘ve got a great track record that we can show to clients, and we have different products with different degrees of security, at different price points, for different applications.” So, watch out for more on Irdeto next week, when we are presenting their multiscreen solutions.