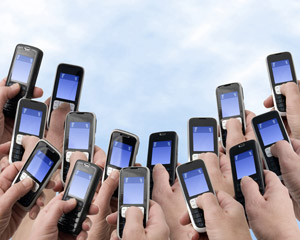 The mobile phone has emerged as the 7th mass media channel, but it has to be emphasized that it is as different from the internet [6th Mass Media] as TV [5th] is from radio [4th]. Trying to force concepts from the internet, TV, or other previous media would produce a disappointing audience experience on mobile, but understanding the unique power of mobile as the 7th mass media can deliver radical new concepts and new players and winners.

Most of the media experts, even those in new media, do not understand mobile. Around ten years ago it started to become a mass media first in Japan, and surprisingly just a few years ago was still dismissed mainly as a youth text messaging and viral marketing channel only. Yet, the economics of mobile produced and still create enormous opportunities.

Three times as many people have mobile phones than personal computers. Twice as many people have a phone subscription than a credit card, more households have mobile phones than TV sets. And most importantly, the mobile phone can replicate all of the previous mass media with six unique benefits, which is why an increasing number of people are consuming premium content such as news, TV, entertainment and games on mobile phones, with numbers here, bound to go up. 2008 was a somewhat bright year for mobile marketers as the growth of web usage was up across all mobile device classes and smartphones in particular. According to ABI Research, this growth is set to continue over the next five years as estimates show highly capable internet browsers on smartphones expanding from 130 million in 2008 to 530 million by 2013. Asia is not to be left behind here and in fact will probably emerge as a leader in this scene as browsing internet content via mobiles and not PCs is already a top trend in Japan, South Korea and Taiwan, proving that such a scenario is not science fiction.

Current statistics all support this, for example, a recent study by Allot Communications reveals that mobile data bandwidth usage grew 30 percent alone in Q2 2009. According to the report, .Asia saw a 36 percent increase, followed by Europe with 28 percent, and the Americas with 25 percent. The Allot GMBT Report is based on data collected from carriers all around the world, with a combined user base larger than 150 million subscribers.

Interestingly, the study also shows that mobile phone users expect to see the same service from their mobile Internet as they receive on their fixed networks. HTTP browsing on the mobile has seen usage increase by 21 percent as it becomes the most popular application all around the world. In addition, HTTP streaming is reported to be the fastest growing application on the mobile, registering a growth in usage of 58 percent (streaming sites are included here). When it comes to HTTP downloads, Allot Communications recorded a rise of 34 percent, which has resulted in this service becoming as popular as Peer2Peer, which accounts for 42 percent of the total bandwidth usage in the busiest mobiles.

We all know that print is the oldest media that introduced advertising and subscriptions to newspapers and magazines. Cinema introduced moving images and multimedia content and the pay-per-view business model, which means that you have to pay every time you watch a movie. So, while the most dominant mass media for the past 50 years has been the television, TV hasn’t really introduced anything new! While each of the previous four mass media has brought innovations, TV has not - yet in spite of this ‘deficiency’, TV has dominated all other media types.

As a mass media, the internet is the first that is capable of replicating all of the other five previous media - we can read books, magazines and newspapers online; view movies; listen to radio; watch TV; download recordings e.g. MP3 files, computer software, videogames etc. This is why it is a threat to the previous five media. Furthermore, the internet has introduced two elements not possible on previous mass media: interactivity and search.

Yes, we could write to the editor of a magazine, but still, most of the other forms of mass media did not have any realistic mass-market interactivity ability ten years ago whereas, on the web it is built in. And search? It has become the most used application on the web. Capable of doing what all other media can do, and adding two powerful new elements, it is no surprise then that the internet is cannibalizing existing mass media. Not to mention, the costs of production on the web are a tiny fraction of those of owning a printing press, a broadcast license, or network for example.

On to the mobile

And now let’s talk about the mobile: the 7th form of mass media and the newest entrant in our midst, but also the least understood. The mobile phone emerged as a mass media from about the year 2000. The youngest of the seven mass media shows many similarities to the internet, but due to its small screen and less convenient keypad, the mobile internet is somehow conveniently and mistakenly seen as ‘simpler’ or ‘dumber’. Similarly, many TV execs look at the tiny screen and think TV on mobile is somehow a ‘reduced’ offering, where viewers will only ‘snack’ at selected highlights. Nothing could be further from the truth. In fact the mobile phone as the seventh mass media is by far the most powerful. It is as different from the web as TV is to radio; mobile media‘s influence will be greater than all we‘ve seen so far of the internet, so much so that mobile to internet will be as dominant in its media audience reach and media impact on society as TV was to radio in the second half of the last century.

Like the internet before it, today’s mobile phones can replicate everything the previous six mass media can do. You can consume newspapers, read magazine articles, listen to radio and podcasts, buy MP3 songs, watch TV and even watch whole movies on the phone. Any web content can be consumed on the smartphone that can easily supersede the interactivity of the web, because email and IM are already on the phone as well as search, but SMS and MMS messaging are unique to mobile. Already in 2006, the value of paid content on mobile at 35 billion USD has been higher than on the fixed wireline internet at 25 billion USD.

The power of the mobile phone as a mass media is due to six elements not available on previous mass media and the 6 unique benefits are:

Considering media content targeting and advertising this means that for practical purposes we know the exact composition of our total audience, individually and exactly, as well as where the media is consumed.